Worthy Is the Slaughtered Lamb: A Lectionary Reflection on Revelation 5:11-14 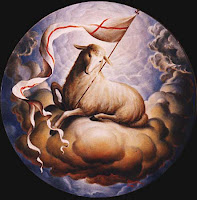 Revelation chapter 5 begins in the throne room of heaven. On the right hand of the One on the throne there is a scroll of unprecedented importance. It is written on the inside of the scroll and on the back, something not often done as it was more difficult to write on the reverse side of the scroll, which was against the grain of the papyrus. It is sealed seven times to insure its secrecy; for it contains the full account of the destiny of the world and human history. It is a book on the course of history (see Psalm 139:16).


An angel appearing as a town crier calls for one who is worthy to break the seals and open the scroll. The summons has been put forth through all of creation and no one is found who is worthy to reveal the meaning of history. No one is able to read and ponder the scroll's words. It appears as if the promise of Revelation 4:1, "Come up here, and I will show you what must take place after this," will remain unfulfilled. Understandably, John breaks down in bitter weeping. Without the unrolling of the scroll, God's plan for creation will be circumvented. The destiny of the world will no longer be assured.

But, John is now assured that the scroll will indeed be opened. One of the elders tells him that there is one who has indeed conquered and therefore is worthy to break the seals and unlock the meaning of history. The Lion of the Tribe of Judah is worthy. And as John gazes upon the Lion, he sees not a strong and mighty beast, but a small lamb; and it is a lamb that has been slaughtered as a sacrifice. And yet, this slaughtered lamb is standing ready to act. Here is the key to the book of Revelation-- God does not conquer evil with the sword, but through cross and resurrection! John Howard Yoder profoundly notes,


But the answer given to the question by the series of visions and their hymns [in the Book of Revelation] is not the standard answer. "The lamb that was slain is worthy to receive power!" John is here saying, not as an inscrutable paradox but as a meaningful affirmation, that the cross and not the sword, suffering and not brute power determines the meaning of history. The key to the obedience of God's people is not their effectiveness, but their patience (13:10). The triumph of the right is assured not by the might that comes to the aid of the right, which is of course the justification of the use of violence and other kinds of power in every human conflict; the triumph of the right, although it is assured, is sure because of the power of the resurrection and not because of any calculation of causes and effects, nor because of the inherently greater strength of the good guys. The relationship between the obedience of God's people and the triumph of God's cause is not a relationship of cause and effect but one of cross and resurrection (The Politics of Jesus).

Any attempt to envisage a literal seven-horned, seven-eyed lamb will discover that the meaning of the vision is missed. John's vision is symbolic in character. This scene in the throne room of heaven is not descriptive, but symbolic of the decrees and action of God in human history, in particular as it centers on the cross and resurrection of Jesus Christ.

Now that the Lamb has creation and its destiny in his hand, John witnesses a scene of universal worship. Three reasons make the Lamb worthy to open the scroll: 1) he was slaughtered, 2) his death purchased women and men for God, and 3) he made those whom he purchased a kingdom and priests.

It must not be missed that the same kind of adoration given to the Lamb in chapter five is quite similar to the worship given to the One on the throne in chapter four.
Posted by Allan R. Bevere at 7:00 AM