A Tale of Two Men: A Lectionary Reflection on Acts 9:1-20 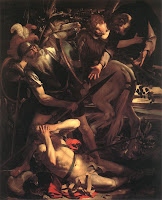 Many years ago during the Christmas season, my wife, Carol and I attended the Cleveland Orchestra's annual Christmas concert.  When that evening finally arrived, Carol and I went out to dinner then we made our way to Severance Hall not too far from downtown Cleveland. Sitting next to me on the other side was a woman who was very finally dressed. I surmised that she was probably a regular concert goer just by her mannerisms and how familiar she seemed with the surroundings.


About ten minutes into the concert I heard the sound of muffled snoring and looked to my left, and discovered that she was sleeping. In fact, I glanced her way several times through the first half of the concert and not once before intermission did she open her eyes. She slept soundly.

After intermission (she did wake up for that) everyone returned to their seats for the second half. It wasn't long before she was asleep again. Only one time did she open her eyes-- when the cymbals clashed loudly and awakened her as she just about jumped out of her seat.

In our reading from the Book of Acts chapter nine, two men are, in a sense, awakened from the routine of their day in a startling way. Saul, public enemy number one, as far as the church is concerned, is traveling on the Damascus Road. He has orders from the religious authorities in Jerusalem to round up as many Jewish Christians as he can find in Damascus in order to bring them back to Jerusalem, presumably to stand trial for their newly found faith in Jesus, which as far as Saul was concerned, was a blatant rejection of the ancestral traditions and a perversion of the faith of Abraham, Isaac, and Jacob. Saul had overseen the stoning of Stephen, a convert to Christianity in Jerusalem, and now he was headed to north where it appeared that Christianity had made solid inroads in the Jewish community there.

On the way along with some companions, Saul is awakened from his own agenda and given another. He will become a member of the very same group he has been persecuting. He will become a follower of Jesus. He is led to Damascus as one struck blind and he waits for the new world that is in store for him.

In Damascus there is a faithful disciple of Jesus, Ananias. We have not heard of this Ananias until now, and after the story of Saul’s conversion concludes, we will never hear of him again. Andy Warhol said that everyone gets his or her fifteen minutes of fame. Acts chapter nine recounts Ananias' brief and famous moments.

Ananias is told that he must encounter this Saul and bring him into the faith through baptism. It is understandable that Ananias would be quite skeptical over Saul's conversion. After all, Ananias has heard of Saul and what he has done to the church in Jerusalem. What is this is a ruse; a trick of Saul's to infiltrate the church in Damascus in order to arrest the leadership and bring them back to Jerusalem? Just as Saul, Ananias is awakened from the routine of his life and called upon to be part of something larger, something that will change the course of Christianity.

Acts chapter nine is indeed a tale of two men. In some ways, both are very different. Ananias' moments of notoriety in the Bible are quite brief, but Saul, who will become St. Paul, will go on to author most of the book of the Bible in the New Testament; and he will become and will remain the most influential theologian in the history of the church. Ananias is a devout follower of Jesus Christ. Prior to this incident on the Damascus Road, Paul is faithfully persecuting Jesus' disciples. Yet, there are ways in which they are both the same. Ananias is committed to his faith in Jesus Christ. Saul is committed deeply committed to his Jewish faith and will bring that same commitment to his Christian faith. Ananias is willing to follow God's lead, even though it is risky. Saul takes the risk of becoming a follower of Jesus and will be sought out for arrest from the very same people who gave him authority to incarcerate Christians.

Most commentators focus on Saul in Acts chapter nine, which is understandable. He is by far the most famous and most influential of the two men in our story. But it is unfortunate that too often Ananias is neglected. He is a critical part of Saul's conversion. He not only initiates Saul into the Christian faith, but it will become his job to convince the Christians in Damascus that Paul's conversion is indeed real and that this former persecutor is now be trusted as a fellow disciples.
Posted by Allan R. Bevere at 7:00 AM