The Church... a Kingdom... a Nation: A Lectionary Reflection on Revelation 1:4-8 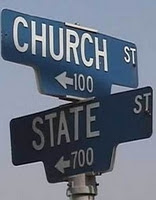 John addresses his letter to the seven churches in Asia. It is important to know this because John will state in verse six that Christ has made the church a "kingdom, priests serving his God and Father."

A kingdom is a nation; it has its own sovereignty, it's own integrity. It is not subsumed into another nation; it is its own. 1 Peter states to the church,


"But you are a chosen race, a royal priesthood, a holy nation, God’s own people, in order that you may proclaim the mighty acts of him who called you out of darkness into his marvellous light" (2:9).


If one is to take the biblical record seriously, there are only two nations in history called by God into existence-- Israel and the Church. While it is unfortunately all too commonplace to refer to America as a Christian nation, that is simply not true. The United States is no more of a Christian nation than Canada, the United Kingdom, or France. To be sure, those nations contain vestiges of Christendom, but that is something quite different from being Christian. When Christians assert the Christian status of any nation, they are positing an alternative ecclesiology which the New Testament rejects. For too many Christians the earthly nation they belong to is their church. No wonder the church in the West is in decline. Would it be the case that Christians were as passionate about the church as they are their nation?

But John is clear in Revelation-- the church is God's kingdom on earth, God's great nation. The church is called to be a light to the nations of the world reflecting in their life and witness what God expects of them.

Such words are important to heed, not only by the religious right that specifically claims that the United States is a Christian nation, but also by the religious left that denies America's Christian status, but continues to quote Scripture as justification for imposing their "progressive" agenda on the state.

Jesus has founded a people, a nation... it's called the church. It's mission is one of witness in word and deed. The task of the church is to be the church. Nothing more and nothing less.
Posted by Allan R. Bevere at 7:00 AM