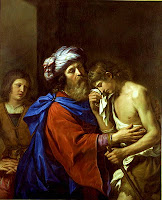 His desire to "find himself" leads him to do something that would disgrace his family and bring shame to his father. He asks for his portion of the inheritance before his father's death, when he would lawfully and rightfully receive it. In so doing he is saying to his father, "As far as I am concerned, Dad, you are already as good as dead. Give me my money now, while I am still young enough to enjoy it."


His father would have been well within his rights to disinherit him, but he does not. In his grief, he gives him what he wants. There is another saying we all know: "Be careful what you ask for; you just might get it." The son gets what he has asked for.

Such a thing never occurred to the younger son, or perhaps it had occurred to him, but he refused to accept it; he refused to accept the possibility that his identity lay in the very place he despised-- his home. So, off he goes with fortune in hand ready to find himself, ready to choose his own destiny. The world is his oyster and he is in search of the pearl of great price.

The young son is now foot-loose and fancy-free to live his life, to forge his own destiny. He leaves dad and the family farm for the bright lights and the big city. With loaded checkbook in hand, he no doubt finds new friends ready and willing to help him spend his money-- and spend it he does; but he doesn't just fritter it away in fancy restaurants and on luxury items. "He squanders his wealth in immoral living." St Augustine states "To be in the realm of lustful passion is the same as to be in the realm of darkness" (Confessions 1.18).

How true it is that just when we think we are in control of our lives, the circumstances of life awaken us from our illusions and confront us with the facts. A severe famine strikes and this wayward young man has nothing to sustain him; even worse, he had nothing to sustain him when he had his wealth; for the real famine was in his soul.

It is sad but true that sometimes we have to hit rock bottom before we can come to our senses. There is, of course, no guarantee that we will. In the almost thirty years that I have been a pastor, I have seen more than a few individuals sink so low that they could take their place beside the prodigal son in the pig sty; and even at the bottom, they continue to live senseless lives. But in the midst of the nonsensical, it is possible to find rationality; and in the foolishness, wisdom waits.

As this wayward son now finds himself in the midst of a senseless situation, he finally comes to his senses. The Greek phrase is literally, "when he came to himself." It would be a mistake to understand this as the young man finally exercising some "common sense;" for living the kind of life God desires involves much more than common sense, especially since there is much so-called "common sense" in the world that is simply nonsense.

Jesus' phrase "when he came to himself" is quite interesting. It is a Semitic way of referring to repentance, and all that entails-- feeling sorry for one's sins and turning from them-- but it seems that there is something more. How is it that a change in mind and deed toward home is coming to oneself?

The son had left home with his inheritance ready to find himself, ready to forge his own destiny. Instead of finding who he was, all he found was emptiness. He left his father to find himself, and found that whoever he was, it was not something he had to discover somewhere out there in a strange place. What the wayward son had come to realize as he fed swine was that when he left home to find himself, in actuality he lost himself; even worse, he had rejected his identity, who he was. That is why when he finally "came to himself" he knew he had to return home.

When this happens foolishness will give way to wisdom, and we will find ourselves because we have first been found by God.
Posted by Allan R. Bevere at 8:00 AM