The Question of Christ in the Earliest Centuries #4 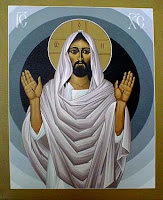 The humanity of Christ is a given in the Gospels. After all, who would question that this child who was born to Mary, grew up in Nazareth, took up the trade as one who worked with his hands, and died so horribly upon a cross was anything else? The question of Jesus' humanity did not become an issue until his divinity was asserted. Therefore, it is appropriate to discuss his divinity first.


The divinity of Jesus was affirmed very early. The Gospel of John presents the clearest expression of the divine nature of Jesus. The notion of Christ as the logos (Word) of God is of critical importance. Paul speaks much earlier of Christ in divine terms (e.g. Philippians 2:6); and Matthew's Gospel offers the triune formula in the Great Commission (28:19).

The earliest christological confession of the church was "Jesus is Lord." In Jewish context, "Lord" was reserved only for God. The term Lord was used in worship. It appears that almost from the beginning, that Jesus was the object of Christian worship. The hymns of the New Testament are exclusively christological in character. This is quite astounding; for no devout Jew in the first century would worship anyone other than God.

The early Fathers of the church speak of Jesus' divinity in clear terms: "Brothers and sisters, we ought so to think of Jesus Christ as of God, as the Judge of the living and the dead" (2 Clement, circa. 90-140 A.D.). Ignatius spoke of both the true deity and true humanity of Christ which led him to speak of the "blood of God."

But controversy was just around the corner...
Posted by Allan R. Bevere at 8:00 AM