The Question of Christ in the Earliest Centuries #2 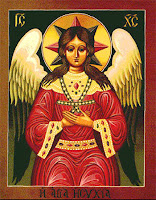 In order to set the context for the question of Christ in the early centuries, a discussion of the theandric union in necessary.


In a monotheistic faith, such as Judaism, this kind of confession caused great difficulty. Those first Christians, in keeping with their Jewish faith, believed in one God alone. Yet, their experience of Jesus told them that he was more than a mere human being. The trinitarian controversies developed in an attempt to understand the person of Jesus in relation to God.

There were two sets of issues that the earliest Christians had to address: 1) How does the Son relate to the Father? (later the subject of the Holy Spirit would enter the debate), and 2) How does the divinity and humanity of Jesus relate to each other and to the person of Christ himself? Christology is specifically related to the second question.

Notice that the first question concerns the divinity of Christ. This is the classical way to approach christology. Many modern theologians, on the other hand, assert that it is necessary to talk of Jesus' humanity, his earthly life, before the matter of his divinity can be discussed. The modern approach may have some sense to it, since Jesus was first observed as a human being. The affirmation of his divinity came later as the Christians reflected back on his life, although it was not nearly as late as many theologians believe. Nevertheless, the question of Christ's divinity should be first for two reasons: 1) It was precisely the question that made Christ's person such a controversial issue, and 2) some contemporary theologians may address the historical life of Jesus first as a way of avoiding the question of his divinity altogether. In so doing, Jesus becomes less of a scandal to modern sensibilities.

At the same time, it is important to note that the two questions, one concerning Christ's divinity and the other pertaining to his humanity, must be held together. If they are too sharply separated, or if one is denied while the other affirmed, then it is impossible to make sense of Christ's work in a meaningful way.

Much contemporary theology has been quite deficient in this area by attempting to keep the significance of Jesus, while denying the necessity of his identity as the God-Man. In so doing such theological reflection is forced to reinterpret the significance of both Christ's death on the cross and his resurrection. This will become clear when we examine atonement.

The theandric union is a contraction of the Greek word theanthropos (God-Man), and is central to christological discussion.
___
Previous Post

The Question of Christ in the Earliest Centuries #1
Posted by Allan R. Bevere at 8:00 AM