Making the Unbelievable Credible: A Lectionary Reflection on Genesis 15:1-12, 17-18 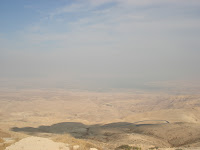 Abraham and Sarah are old; and they have no children. In order to secure some kind of future for himself after his death, Abraham decides that Eliezer of Damascus, a slave born while his mother (and father?) were owned by Abraham, shall be his heir. What else can he do?


But God has something bigger and more unbelievable in mind. God will indeed give Abraham and Sarah a biological child in their old age. What human beings cannot accomplish on their own, God can bring to pass. But the promise includes more than a direct heir for Abraham. Through this child God will give to Abraham and Sarah so many descendants over time that they will seem as vast in number as the stars in the heavens. It would be a miracle enough for Abraham to have a son in his old age, but God is not content to stop there. Abraham and Sarah will become parents of a great nation.

"And [Abraham] believed the Lord; and the Lord reckoned it to him as righteousness," says verse 6. As the Book of Genesis progresses, however, we will find that Abraham struggles at times to believe God's promise. But at this point, he indeed has faith. But Abraham does have one question of God:

Then [God] said to [Abraham], 'I am the Lord who brought you from Ur of the Chaldeans, to give you this land to possess.' But he said, O Lord God, how am I to know that I shall possess it?' (15:7-8). It is at this point, God does something quite extraordinary. Ralph Klein writes,


The issue in vv 7-12, 17-18 is whether the promise of land to Sarai and Abram is credible. Yahweh instructs Abram to bring a number of animals and cut them in pieces and lay the cut up pieces side by side. A smoking fire pot and a flaming torch, symbolizing Yahweh, passed between the cut up pieces and Yahweh made a covenant with Abram to give him the land from the river of Egypt (the Wadi el-Arish in the Sinai peninsula) to the Great River, the river Euphrates.

This ritual is clarified by the curses attached to a Sefire treaty, from the 8th century BCE: "Just as this calf is cut in two, so may Mati`el [one of the kings involved in this treaty] be cut in two, and may his nobles be cut in two." In Genesis, therefore, Yahweh is invoking upon himself a curse in order to make his promise credible: "May I Yahweh be cut in two if I do not carry through on my promise to Sarai and Abram to give them the land."

The God of Israel, the God who is perfectly trustworthy, who is holy and righteous and incapable of deceit, makes the difficult to believe promise of land to Abraham credible in this act of covenant. God does not chastise Abraham for his doubts; instead he assuages his doubts in an act reserved only for fallible and all too often deceptive human beings.


Abraham and Sarah had a hard time believing the promise of the land. Would it help God says if I would invoke upon myself a curse? That is, may I be cut in pieces like these animals if I don't fulfill this promise. At other times in the Old Testament God reinforces his promises by "swearing by himself" or "by raising his hand to heaven." When a promise is hard to believe, God reinforces the promise by putting himself at risk. Now can you believe?

Here is a God whose journey with his creation involves risk, involves the possibility that things will not work out the way God wants. God asks Abraham and Sarah to risk much in their divine call. God is willing to do no less for them.
Posted by Allan R. Bevere at 8:00 AM