Do Not Converse with Temptation: A Lectionary Reflection on Luke 4:1-13 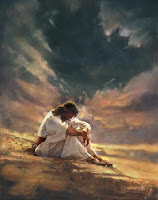 The owner of a small business walked into work one morning with his usual package of a dozen donuts for himself and his employees. Those who were already at their desks working were surprised that he had donuts because he was on a diet prescribed by his doctor; and it was a diet than not surprisingly excluded donuts.

His employees questioned him. "We thought you were on a diet?"


"I am," he said, “but this morning as I left the house I was really craving a chocolate frosted donut. So I prayed to God and said, 'Lord, if it be your will that I not have a donut, please make it so there are no parking spots at the donut shop.'"

One employee responded, "Well, there obviously was a parking space available."

"Yesiree," said the business owner. "After circling the donut shop fourteen times, there was a space open right in front of the door!”

In the desert, Jesus does not engage the tempter. In the Garden of Eden, Eve chose to explain to the serpent why she and Adam were not allowed to eat the fruit from the Tree of the Knowledge of Good and Evil (Genesis 3:1-7). That very conversation was the beginning of their downfall.

Jesus does indeed speak to Satan, but in a very different way. There is no conversation back and forth between them. When one is being tempted, conversation can lead to rationalization, and rationalization often leads to sin. Jesus refuses to converse. Instead, he quotes Scripture as a reminder to himself that he must submit to the will of his Heavenly Father, and not the desires of the Tempter.

"Make these stones bread." No! Life does not consist only in food.

"Worship me and I will give you all the power you desire." No!-- God alone is to be worshiped.

"Show the people something spectacular. Jump off the highest point of the House of God. God will save you." No!-- God's promises are not to be trivialized by deeds which question God's faithfulness.

When temptation comes our way, we must not give it a comfortable seat.
Posted by Allan R. Bevere at 8:00 AM