A Matter of Great Urgency: A Lectionary Reflection on Luke 13:1-9 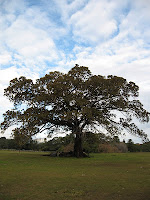 As Jesus continues his final journey to Jerusalem where he will be crucified, the closer he gets to the capital city, the more one gets a sense of urgency that is building in Jesus himself. The time is short and there is no time to mince words (not that Jesus ever did). It's almost as if one can hear the words of Bob Dylan in the background: "...let us not talk falsely now, the hour is getting late."


Mark tells us that the essence of Jesus message was "The time has come. The kingdom of God is near. Repent and believe the good news!" And while Luke does not specifically summarize Jesus' message that way, it is very clear that Luke has repentance in view as well. That is the essence of John the Baptist's preaching (Luke 3:8). And one of the clear signs of repentance is "producing fruit" (again Luke 3:8), proving by one's actions, one's way of life, that one has turned one's life Godward.

So, it is no coincidence that in the first nine verses of Luke 13, Jesus connects repentance with fruit.


Then he told this parable: "A man had a fig tree planted in his vineyard; and he came looking for fruit on it and found none.So he said to the gardener, 'See here! For three years I have come looking for fruit on this fig tree, and still I find none. Cut it down! Why should it be wasting the soil?' He replied, 'Sir, let it alone for one more year, until I dig round it and put manure on it.If it bears fruit next year, well and good; but if not, you can cut it down.'" (13:6-9).

All are in need of repentance. In the eyes of God no one is a worse offender than others. Without repentance, there can be no salvation.

We know that God knows the human heart, but God also looks for lives that bear fruit. Sometimes people will justify their bad behavior by saying, "Well, God knows my heart," as if our hearts can be pure while we are acting terribly. But, God knowing our hearts should not be a reason to brag; it should be a cause for repentance. God, who knows our hearts, also looks at our actions. And even though repentance is not something that should be put off, God is patient with us because God loves us.

When I was a boy, my grandparents had two apple trees in their yard about twenty feet apart from each other. Every summer they produced a great crop of green apples that were not really suitable for eating, but were great for apple fights. My brother and my cousins usually had at least one apple fight each summer with one side at one apple tree and the rest of us at the other. And though the apple fight usually never ended well because someone would get angry-- and then our grandparents would come outside and yell at us to stop-- every summer the cousins would gather at the trees again and engage in the great apple fight of 1972 or 1973 or whatever year it happened to be.

In Jesus' parable, the landowner is tired of a fig tree that produces no fruit. He is ready to cut it down; for it is just taking up space. But the gardener convinces him to wait one more year. Perhaps if it is nurtured a little longer with water and fertilizer and proper care for another year, that will be sufficient to make it productive. The landowner consents to the gardener's request. One more year indeed; but only one more year. The time for the fig tree to produce fruit has grown short.

Israel, the people of God, is the Lord's vineyard, the Lord's fig tree in the midst of the vineyard. God expects them to produce fruit. But God loves his people.  He does not want to judge them, so God is patient. In the big picture of things, it is probably the case that God "errs on the side of grace" when it comes to God's dealings with his people, but judgment cannot be put off forever. God may be perfectly loving, but God is also perfectly just. God is much more patient than women and men, but even God's patience will wear out.

This passage ends on a note of grace... "one more year"... but the specter of judgment is still present... "if it doesn't bear fruit, cut it down."

And once again we are back to the essence of the message Jesus proclaimed throughout Israel, "Repent, for the kingdom of God is at hand."
Posted by Allan R. Bevere at 8:00 AM

Hey Allan, thanks for these reflections. While you have focused on the latter part of this passage, I have been thinking about the first part - where Jesus asks: do you think that those who suffered under Pilate were worse sinners than the rest of the Galileans? No! In this part, he seems to be saying our suffering is not because of our sin.

But then Jesus turns around and seems to be saying the opposite. He says, if we don't repent, we'll perish. How do you make sense of this apparent contradiction? Thoughts?

An excellent question. My initial thought is that Jesus is critiquing those who rank sin-- "Yes, I know I'm not perfect, but at least I'm not like those who..." Another thought is that he is reminding all of us that we are all sinners and guilty. I'm thinking of the parable of the Pharisee and the tax collector.

What are your thoughts?

I think the first part is an invitation to discuss suffering. All are subject to life's calamities. These are not the result of sin. The second part about the fig tree can be seen in terms of God being the Gardner. God is willing to give grace that we might turn to God.I think people are much more concerned with results and production. The images of God found in Luke help us see God as gardener.