Why Did the Theological Chicken Cross the Road? 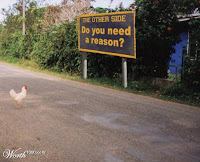 from Unvirtuous Abbey:
___
Why Did the Theological Chicken Cross the Road?

Pelagius: Because the chicken was able to.

Irenaeus: The glory of God is the chicken fully alive.


C.S. Lewis: If a chicken finds itself with a desire that nothing on this side can satisfy, the most probable explanation is that it was created for the other side.

Billy Graham: The chicken was surrendering all.

Pluralist: The chicken took one of many equally valid roads.

Universalist: All chickens cross the road.

Martin Luther: The chicken was fleeing the Antichrist who stole the Gospel with his papist lies.

Tim LaHaye: The chicken didn’t want to be left behind.

Rob Bell: The chicken. Crossed the road. To get. Cool glasses.

Joel Osteen: The chicken crossed the road to maximize his personal fulfillment so they he could be all that God created him to be.

John Piper: God decreed the event to maximize his glory, or it was an act of Christian hedonism.

Mark Driscoll: A bleeping chicken crossed the road to go get a beer.

Gary Demar: The chicken was fleeing the destruction of Jerusalem in AD 70. That’s it.

Jim Wallis: The chicken is an organizer for Occupy Barnyard.

Emergent: For this chicken, it’s not the destination that’s important. It’s the journey itself.

N.T. Wright: This act of the chicken, which would be unthinkable in British barnyards, reeks of that American individualism that is destructive to community.

Al Mohler: When a chicken begins to think theologically, he has no other alternative but to come over to the Calvinist side of the road.

Michael Horton: The chicken was forsaking the kingdom of this world to live solely in the Kingdom of Christ.

John Frame: The chicken had an existential need to change its situation according to a new norm.

T.F. Torrance: The inner logic of the incarnation proved an irresistible draw to the other side of the road.

Dietrich Bonhoeffer: He was abandoning cheap grace for the costly discipleship of risking the dangers of crossing the road.

Karl Barth: The crossing of the road, like all true theology, was done for profoundly Christological reasons. All chickens cross the road in the end.

Paul Tillich: Because he sensed that the other side of the road represented the ground of all being.

New Ager: Because he saw the light beckoning him forward.

Fundamentalist: Because his pastor told him so.
Posted by Allan R. Bevere at 1:00 PM