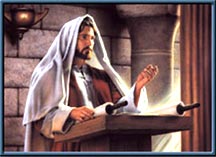 Presidential inaugurations are a big deal. Every four years thousands of people travel to Washington D.C. for the very brief oath of office that the president will take and then listen to the inaugural address that is customary for every POTUS. The length of inaugural addresses have varies with each president. The shortest inaugural address was delivered by George Washington at the beginning of his second term as president in 1793. The longest was given by William Henry Harrison in March of 1791. He spoke for an hour and forty-five minutes without a coat and hat in a driving snowstorm. He died a month later from pneumonia.The truth of the matter is that most inaugural speeches are not well remembered. That's not because the speeches are not interesting, but memorable speeches seem fatefully tied to difficult and trying circumstances; and they cannot be judged as significant until enough time has passed for history to make its judgment.


President Thomas Jefferson gave his first inaugural speech in March of 1801 during a very nasty fight that was taking place between those who favored a strong central government, like John Adams, and those who believed that more authority should reside in the hands of the states as Jefferson argued. In the midst of that bitter struggle, Jefferson's now famous line from his second inaugural speech, "We are all Republicans, we are all Federalists," was Jefferson's call for everyone to work together for the good of the nation.

Abraham Lincoln's second inaugural address has also gone down in history as a great speech. By March of 1865, it was clear that the North was winning the war and Lincoln wanted to strike a chord of reconciliation knowing that there were those in the North who wanted the South to pay for its secessionist ways.


With malice toward none; with charity for all; with firmness in the right, as God gives us to see the right, let us strive on to finish the work we are in; to bind up the nation's wounds; to care for him who shall have borne the battle, and for his widow, and his orphan—to do all which may achieve and cherish a just, and a lasting peace, among ourselves, and with all nations.

Lincoln knew that reconciliation, though difficult, was the only way for the reunited nation to move forward toward prosperity.

On March 4, 1933, Franklin Roosevelt took the oath of office during the early years of the Great Depression. In his first inaugural address came the words of inspiration and comfort, "...first of all, let me assert my firm belief that the only thing we have to fear is fear itself—nameless, unreasoning, unjustified terror which paralyzes needed efforts to convert retreat into advance."

It was a call to resist fearful paralysis and move forward in bold action during a difficult time.

In his hometown of Nazareth, Jesus gives his inaugural address as he begins his ministry. It casts a large vision of what God is planning to do in him and through his ministry. God is going to bring restoration to the people of Israel-- all the people-- the poor, the captives, the blind, and the oppressed. All will participate in this Jubilee restoration including the Gentiles. Jesus' reference to the widow of Zaraphath and Naaman the Syrian make that clear. God's restoration is coming, but it will not look like Jesus' hearers have envisaged. Thomas Jefferson's hope that all Republicans and Federalists would be reconciled was not fulfilled; but in Jesus God will indeed bring the reconciliation of all things. All will be extended the invitation, including those on the margins of society and those outside the covenant with Abraham.

The words of Isaiah are being fulfilled in Jesus.
Posted by Allan R. Bevere at 7:00 AM