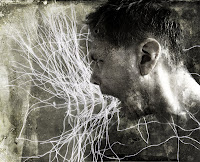 Good words from Jonathan Storment:
___
Of the Seven Deadly Sins, anger is possibly the most fun. To lick your wounds, to smack your lips over grievances long past, to roll over your tongue the prospect of bitter confrontations still to come, to savor to the last toothsome morsel both the pain you are given and the pain you are giving back--in many ways it is a feast fit for a king. The chief drawback is that what you are wolfing down is yourself. The skeleton at the feast is you. -Frederick Buechner

A few weeks ago, I spent some time with the Catholic Monk Fr. Richard Rohr and I asked him about the rise of ISIS and what he would say to Christians in America about that kind of evil.  And his response was profound.  He said, Just because what ISIS does is evil, doesn't make what you do good.


I think this is the great temptation of wrath.  It, like love, promises to cover over a multitude of sins.
But unlike love, the sins that wrath covers over is only our own.  Wrath leads us to become more and more self-absorbed and less and less self-aware.

There is a reason that most of what Scripture has to say about anger is negative.  In the book of James, James brings up a couple of times that the poor people don't need to use physical or verbal violence against the rich to establish justice.  He says that wrath, actually doesn't bring justice.  Isn't that interesting?  Because that is what every wrathful person is after.  And James says to people who have good reason to be angry, don't go down that road.

Now, before you disagree with James here, let us at least get everything out on the table.  The thing on which you are focusing your anger often isn't the only reason you want to be angry. Self-righteous anger feels really good, doesn't it?  But if what we want is really the justice of God, James thinks we need to get out of the way, because when we burst out with our anger, it is never quite as pure as we trick ourselves into believing, is it? When we explode with anger, it is filled with all kinds of nasty stuff like wounded pride and malice or envy. Christians shouldn't dismiss their anger, but at least we should be very, very suspicious of it.
___
The entire post is a must read here.
Posted by Allan R. Bevere at 12:00 PM