The Sound of Music in a Broken Land: A Lectionary Reflection on Luke 1:46-55 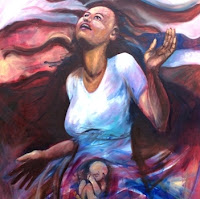 Almost six hundred years before the birth of Jesus, a psalmist wrote a sad song of exile in Babylon:

By the rivers of Babylon--
there we sat down and there we wept
when we remembered Zion.
On the willows there
we hung up our harps.
For there our captors
asked us for songs,
and our tormentors asked for mirth, saying,
'Sing us one of the songs of Zion!'


Nothing will stifle the sound of music more than the loss of hope, and the Jewish exiles in Babylon had lost hope. Jerusalem was laid waste, the temple was nothing but rubble, and God's people were now taken to live in a strange land-- the land of their conqueror. There was nothing left to do with one's musical instruments than to hang them on the trees like heirloom ornaments on a Christmas tree-- reminders of a past that existed no longer. Hope is more powerful than fear, but when hope is lost, fear rushes in to fill the vacuum; and fear leads to hate. It's no wonder the psalmist offers a blessing to those who slaughter the enemies' babies (v. 9)

Some six hundred years after God's people hung their harps on the willow trees, a young woman-- a Jew and a descendant of those silenced musicians-- sings a song of hope.

'My soul magnifies the Lord,
and my spirit rejoices in God my Savior,
for he has looked with favor on the lowliness of his servant.
Surely, from now on all generations will call me blessed;
for the Mighty One has done great things for me,
and holy is his name.
His mercy is for those who fear him
from generation to generation.
He has shown strength with his arm;
he has scattered the proud in the thoughts of their hearts.
He has brought down the powerful from their thrones,
and lifted up the lowly;
he has filled the hungry with good things,
and sent the rich away empty.
He has helped his servant Israel,
in remembrance of his mercy,
according to the promise he made to our ancestors,
to Abraham and to his descendants for ever.' (Luke 1:46-55)

The sound of music is once again heard by God's people in Israel... in exile in their own homeland under the thumb of the mighty Roman Empire. The promise of God enters into the midst of a broken land and a young virgin sings a song of hope. She sings even though there appears to be little promise for the future; but she has heard the voice of God-- the same God who delivered her people centuries before from another mighty empire across the Nile River. When that God speaks, great things happen. When that God promises, fulfillment will indeed take place. Hope does not give way to fear because hope is based on the promises of the One who always keeps his word.

It has been said that we live in a prose world in desperate need of poetry. Prose expresses ideas and convictions; poetry ponders why those ideas and convictions matter. Prose pronounces what is; poetry imagines what can be. It is no accident that so many of the Scriptures the church reads during Advent are expressed in poetry. It's not simply enough for Mary to say, "I'm going to have a baby," but she must poetically sing the meaning of her child's birth-- "He has helped his servant Israel, in remembrance of his mercy, according to the promise he made to our ancestors, to Abraham and to his descendants for ever." In Advent we are invited to imagine with Mary what can be. If we are open and willing, we can strain our vision over the horizon of Mary's song and see the salvation of God.

But this song of hope comes with a warning--

He has shown strength with his arm;
he has scattered the proud in the thoughts of their hearts.
He has brought down the powerful from their thrones,
and lifted up the lowly;
he has filled the hungry with good things,
and sent the rich away empty.

We who sing with Mary also need to ask if we are at the very least complicit with those whom God will one day bring down-- the proud, the powerful, and the rich-- we who camp out all night on Thanksgiving to push our way through ahead of others to get that deal, we who do not really need to ask for our daily bread because most of us will die from too much bread rather than too little, we who support the decisions of the leaders we elect that cause pain and misery and destruction in the lives of others. In Jesus, God will one day lift up the lowly. Will God lift us up or pull us down, fill us with good things or send us away empty?

Will we add to the brokenness of the world, or will we sing songs of hope in word and in deed that will bring this wonderful message of salvation to the world?

Do we bring the hope, the sound of God's music to those around us?
Posted by Allan R. Bevere at 7:00 AM

Thanks for these thoughts, Allan. I like how you compared the two verses to show the lack of hope in one, and a surging of hope in the other (even though there were a lot of comparable circumstances). The Jews were looking for someone to rise up to overthrow the Romans, but Jesus comes in a way few expected. Those who did expect it were filed with joy like Mary. When we realize who Jesus is and what He came to do, our hearts are filled with that same poetic-praise you shared about. Thanks for writing!