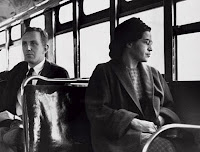 from Lindsay Deutsch and Josh Moon:
___
[Today] marks 60 years since Rosa Louise McCauley Parks refused to give up her bus seat in Montgomery, Ala., to a white man, becoming an iconic symbol in the Civil Rights Movement. Here are some facts about that moment:


1. Parks wasn't the first. Fifteen-year-old civil rights activist Claudette Colvin came before Parks in making news for being dragged off a bus and jailed for not giving up her seat, but she was pregnant at the time and the NAACP didn't think she could get the support of conservatives to spark a movement.

2. She was an activist. Parks was a seamstress by trade, but was deeply active in the NAACP and Montgomery Improvement Association, working to improve civil rights in her community.

3. Parks knew the bus driver. The driver was James Blake, who had a reputation for treating black passengers without dignity.

5. It lasted more than a year -- and helped begin the Civil Rights Movement. After Rev. Martin Luther King Jr., made a speech at Holt Street Baptist Church asking people to join in the fight against segregation, nearly 20,000 passengers boycotted Montgomery’s buses regularly for the 381 days it lasted,...
___
USA Today has all the details here.
Posted by Allan R. Bevere at 1:24 PM