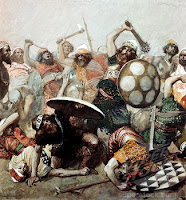 This is a guest post from my friend and fellow blogger, Ted Gossard, who blogs at Jesus Community:
___
The psalms were written in a different era and chapter in the Story of God. Part and parcel to that time, many of the men of God's people had to train for battle and at times participate in it. It was both a necessary act of living in a territorial, violent world, and part of God's judgment on certain peoples and individuals according to the Old Testament/Hebrew text. So we find in a number of the psalms ascriptions to this, and elsewhere in scripture, in the Pentateuch (Genesis through Deuteronomy), Joshua, 1 and 2 Samuel, etc.

Fast forward to today and we see no such texts in the New Testament, not in the gospels, Acts, or the letters. What we do find in the Revelation is arguably apocalyptic, and not at all to be pressed in the literal way in which they sometimes are (as in, for example, The Left Behind series).

There are examples of those serving in the Roman military who were exemplary in their faith. It seems that something of the training they had received helped them in their faith, at least that's clear enough from what a centurion said, and the Lord's words of commendation afterward. But we have no examples of God's people encouraged to participate in such. I am a pacifist follower of Christ, and I look to both the scripture itself, as well as the witness of the early church fathers in the first centuries of the church. And I find a univocal witness that Christians are not to participate in the militaries of the nation states/ governments of their citizenry. That being said, Christians don't agree on this. But in spite of our disagreement, that in no way diminishes the point of the warfare we are called as God's people in Jesus to participate in.

What we do see is a clear call to spiritual warfare (Ephesians 6:10-20; 2 Corinthians 10:1-6). Our struggle we're told is not against flesh and blood, but against heavenly spiritual entities. Which would seek to undermine our witness to the gospel which proclaims their doom along with the realization of God's will in and through Jesus. We have to be strengthened in the Lord, in his mighty power, and take up the full armor of God in resistance to the enemy who eventually will flee. But the battle in this present time continues. Though Jesus has won the victory through his death and resurrection, how people are brought in and become a part of his triumphal procession through the gospel and the church continues on.

In light of that, what are we to make of texts like this, one such example from the psalms?:

Praise be to the Lord my Rock,
who trains my hands for war,
my fingers for battle.
He is my loving God and my fortress,
my stronghold and my deliverer,
my shield, in whom I take refuge,
who subdues peoples under me.

I think such texts can help us learn to appreciate that we are in no less than a war. Not a physical war, to be sure, but spiritual warfare. We are soldiers in that realm. We have to have that attitude, that come what may we are in this for the long run, the duration of our time here.

That involves ongoing training, the discipline and everything that goes into becoming "a good soldier of Christ Jesus" (2 Timothy 2:3). There is no furlough from this, though God does grant us some good times of rest.

Granted, that while the Hebrew/Old Testament texts concern physical warfare, they do so in the context in which the battle does not depend on one's strength or sword, but on the Lord. Once (early in a formative period) they were to stand still and see God's mighty hand in delivering them, at other times their method was anything but conventional. That highlighted the fact that they were fighting the Lord's battles, participants in that. All of that somehow has meaning for us today in the midst of the spiritual battle we are a part of in the Lord.

We are more than soldiers in the realm of the Spirit. We are also servants and above all sons and daughters of God, family in and through Jesus. That needs to be remembered in the midst of the spiritual warfare, especially when the battle is hot. We need all of scripture in this, as we continue on together in and through Jesus to the end.
Posted by Allan R. Bevere at 7:00 AM