The Faith of Our Founders #6: Benjamin Franklin 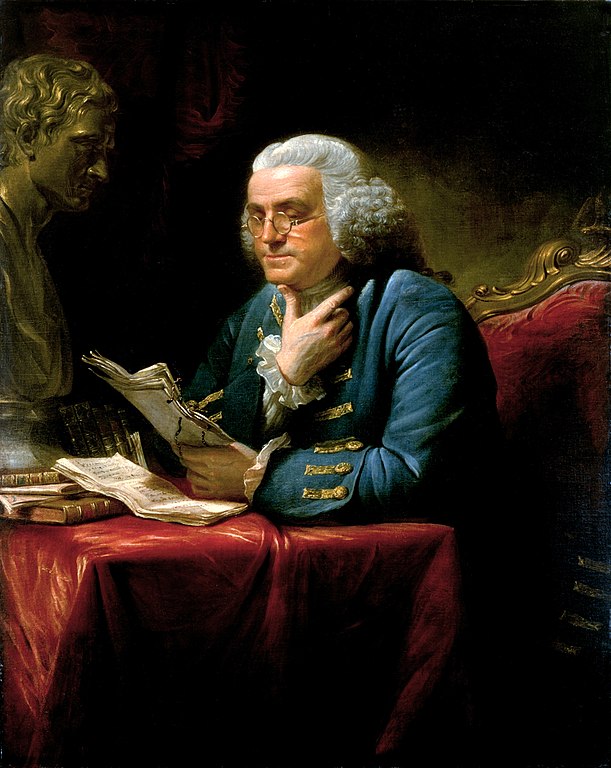 Benjamin Franklin was born in Boston, Massachusetts in 1706 and raised in a Puritan home in which his father Josiah taught a strict Calvinism of election and reprobation. Franklin would come to reject both and as a young and inquisitive man in his teens, he would consider atheism as a logical possibility (in his early years he often used the terms "deism" and "atheism" interchangeably). He would not consider atheism for very long, but he would not return to his Puritan Calvinist roots. He would instead embrace deism finding that the arguments in its favor were more convincing than those against.(1)

One of the interesting questions debated by Franklin scholars is whether or not Franklin embraced a kind of gnostic polytheism, In his "First Principles" he writes the following:


I conceive then that the Infinite has created many Beings or Gods, vastly superior to Men, who can better conceive his perfections than we, and return him a more rational and glorious praise. As among men the praise of the ignorant or of children is not regarded by the ingenious painter or architect, who is rather honored and pleased with the approbation of wise men and artists.

It may be that these created Gods are immortal, or it may be that, after many ages, they are changed, and others supply their places.

Howbeit, I conceive that each of these is exceedingly wise, and good, and very powerful; and that each has made for himself one glorious sun, attended with a beautiful and admirable system of planets.

It is that particular wise and good God who is the Author and Owner of our system that I propose for the object of my admiration and praise.

Thus, what Franklin proposes is that it is the God who created our solar system as the one individuals on planet Earth worship. It is the Infinite Father who created this lesser God, who is not only beyond our comprehension, but far above even human praise.

The debate among Franklin scholars is whether Franklin should be taken literally(2) or whether he is speaking metaphorically or introducing a thought experiment of some kind.(3) If indeed Franklin was willing to consider such a polytheism in his younger days (and I think this was likely), in his old age he backed away from it suggesting that it was no longer an article of faith for him, but only a possibility.

In his younger years Franklin held to the odd belief that all persons received an equal share of pleasure and suffering in life, but changed his opinion because of his realization that King George III was the worst international villain of the eighteenth century (which was not true) being the cause of terrible suffering for the colonists.(6)

Franklin believed that it was important to spread the teachings of Jesus but seriously doubted his divinity. Indeed, Franklin believed that promoting the teachings of Socrates to be just as important as those of Jesus. Unlike some other Founders who were semi-regular to regular church goers, Franklin showed very little interest in attending public worship. He did enjoy the sermons of George Whitefield(4), but found too much preaching to be centered on dogma and doctrine and not virtue. Upon listening to a Presbyterian pastor for five consecutive weeks Franklin complained that his aim was rather "to make us good Presbyterians than good citizens."(5) Indeed, Franklin believed that the church's main purpose was to make good citizens.

It was virtue that concerned Franklin the most in reference to religion and citizenship. Like Franklin, the major Founders emphasized the ethical implications of religion. What was important was not doctrinal speculation but what kind of citizens religion produced. But no Founder comes close to Franklin in reference to working out virtue and morality in his writings. He expressed such a strong belief how one lived over what one believed, in a letter to his brother John, he stated, "I should have more dependence on works than on faith."(7)

To that end, Franklin's religion was very pragmatic. He expressed serious doubts that God answers prayer, though he thought prayer acceptable because it certainly couldn't hurt. He was, however, opposed to prayer as a justification for human inaction. His pragmatism led him to embark on a revision of the Book of Common Prayer modernizing the language and shortening it's redundancies. He also suggested that the churches should shorten their services because the infirm could not tolerate being in a cold and damp environment for so long and that shorter worship might attract younger people. This religious pragmatism was evident in Franklin even at a young age when he suggested to his father that offering grace over the meat while it was still in the barrel would save time over saying it over just a portion at every meal.(8) During a tense moment at the Constitutional Convention of 1787 Franklin suggested that the proceedings pause for a time of prayer. Considering Franklin's views on prayer what he suggested was less about prayer and more a pragmatic way of introducing some serenity into the Convention. It didn't work-- the Convention debated Franklin's suggestion for twenty minutes before deciding against it.

In his younger years Franklin expressed doubt about an afterlife, but in his later years expressed the doctrine more in terms of hope than of doubt. His hope was not based on the Bible, but on his observations of nature, which Franklin said was the "Book of Nature," which was to be read as a primary text for Devotees of Reason.

At the age of twenty-two Benjamin Franklin wrote the following for his epitaph, which was not engraved on his tombstone:

The body of Benjamin Franklin, Printer (like the cover of an old book; it's contents torn out and stripped of its lettering and gilding), lies here, food for worms; but the work shall not be lost, for it will (as he believed) appear once more in a new and more elegant edition, revised and corrected by the Author.

Franklin's views on immortality were clearly informed by his observations of nature. Franklin never mentions Jesus' resurrection when discussing the topic.

The Faith of Our Founders #5: Thomas Jefferson

(1)Alf Mapp, The Faiths of Our Fathers.

(2)Alf Mapp, The Faiths of Our Fathers.

(4)Dean Merrill, Sinners in the Hands of an Angry Church.

(6)Alf Mapp, Sinners in the Hands of an Angry Church.