Seventeenth Century Preaching on the Virtues of Tobacco 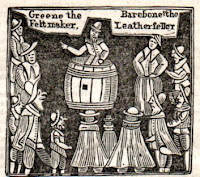 Some things have indeed changed for the better. Thank goodness that Methodist preachers only got paid with chickens.
___
Jamestown was founded in 1607 in what is now Virginia, but for the first several years of its existence the settlers couldn't figure out a way to support themselves. They tried, corn, timber, glassblowing, even silkworms. Nothing worked; Jamestown grew more and more impoverished, failing to attract new settlers in significant numbers, and it drained more of the motherland's resources with each passing year.


Then, in  1617, John Rolfe... developed a strain of tobacco that was something of a miracle. After experimenting for several years, every trial and error, Rolfe came up with Nicotiana tabacum, which was hardy enough to thrive in the Virginia soil and yet mild enough to please even the most delicate palates among British smokers. Suddenly Jamestown had an industry, a reason for being. Tobacco became the first profitable American export....

Soon the leaf became big business not only for Virginia but for neighboring colonies as well.... And then it became more than a business, not just a product in itself but a standard for measuring the value of other products. Which is to say, tobacco became a form of currency. Almost everything that could be purchased with cash in seventeenth-century America could also be purchased with tobacco, from slaves to wives, from a blacksmith's labor to a militiaman's vigilance. You could use tobacco to buy food, beverages, fabrics, tools, and books-- even the Bible. In the years leading up to the Revolutionary War, churchgoers in Virginia paid their clergyman in tobacco. As the historian Jerome E. Brooks has observed, "Superb sermons were often thundered from pulpits on the importance of raising good tobacco and the moral necessity of curing it properly."
.
The thunderers were paid about 16,000 pounds of tobacco a year, although they could supplement their earnings with extra duties-- another 200 pounds for officiating at a wedding, perhaps twice that for some well-chosen words at a funeral. Most clerics did not think it enough. Most farmers thought it excessive.
___
From Eric Burns, Virtue, Valor, and Vanity: The Founding Fathers and the Pursuit of Fame (New York: Arcade Publishing, 2007), pp. 69-70).
Posted by Allan R. Bevere at 6:30 AM