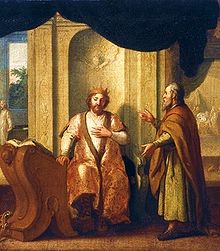 Being a prophet is tough. Prophets are called to speak the truth and sometimes the truth is not popular. It is not only difficult to speak the prophetic word, it can be dangerous.

David is the king of Israel. He is a powerful man. Powerful leaders tend to find themselves surrounded by advisers who say the kinds of things they think the king wants to hear-- "Your Highness, things are going splendidly. Your subjects adore you." "Your Majesty, while it may be going outside the law, the safety of the people is a top priority." And when kings find themselves surrounded only by loyal toadies, they can become insulated and think they live by a different standard than everyone else. They can come to believe that they are above the law and their actions, though wrong for others, are in the best interest of the common good.


And then kings get used to getting whatever they want. And they can tend to want less of what is good for the kingdom, and more of what is desirable to the king. David desires Bathsheba. He gets what he wants. Bathsheba has no say. In the church we refer to this event as David's adultery with Bathsheba. If we were truly honest, we would admit that in reality this was David's rape of Bathsheba.

Nathan must now give to David the difficult word of truth. If Nathan doesn't, no one else will. David has acted  treacherously, dishonestly, and selfishly. He believes that because he is king he is entitled to what is off limits to others. The king bears unique burdens. Shouldn't the king have special perks? It is Nathan's task to dispel such allusions. The prophet exists to remind the king that he who is to administer justice is not permitted to be unjust. As ruler, he is to execute the law, not trample upon it; and that is just what Nathan does.

Nathan tells the heart-wrenching story of two men, one with more than enough, the other with very little. While the rich man has flocks and herds in abundance, the poor man had only one lamb that not only provided milk--sustenance-- but companionship. The rich man needs to entertain a traveler-- the code of hospitality demands it. But he is too stingy to take from his vast flock; and so he steals the poor man's beloved lamb and slaughters it to feed to his guest.

David is justifiably angry, and he is ready to exact justice on the wealthy man who has behaved in such an evil manner. "Then David's anger was greatly kindled against the man. He said to Nathan, 'As the Lord lives, the man who has done this deserves to die; he shall restore the lamb fourfold, because he did this thing, and because he had no pity.'"

"And then Nathan said to David, 'You are the man!'" The king's court must have fallen silent.

If David had desired, he could have squelched Nathan's word and Nathan along with it. It's dangerous being a prophet, but the word of the Lord must be spoken in season and out of season (2 Timothy 4:2). Nathan does so at great risk to himself. But he is a prophet. His task is to preach the word of the Lord, to speak the truth. The personal consequences are not to be weighed.

Indeed, being a prophet is quite dangerous.
Posted by Allan R. Bevere at 6:00 AM

I have been preaching a summer series of sermons on David. Yesterday, preached about David and Nathan. I observed that we are like David in that we always see the sin in someone else but have difficulty seeing it in ourselves. Thus we always point fingers and say that the problem is with "those liberals" or "those conservatives" or those _fill in the blank_ I told the story of GK Chesterton who, in response to the question, "what is wrong with the world?" responded, "I am." the prophet approached David, not scolding and berating him for his immorality, but rather telling him a story which invited him to see himself in a new light and thus repent. The church as the prophetic community is called to tell and live the story of Jesus in such as way at to invite people into repentance which is a life-long process of confessing our sin, asking for forgiveness, and seeking transformation. Here ends my summary of yesterday's sermon.