The Future of Methodism: Globally South and More Charismatic 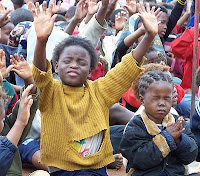 from David F. Watson:
___
According to a recent article in First Things, drawing upon statistics from the "Status of Global Christianity" report published by the International Bulletin of Missionary Research, the number of Christians in Africa has grown from 8.7 million in 1900 to 542 million today. There may be 1.2 billion Christians in Africa by 2050. The article continues, "But perhaps the most astonishing numbers in the survey involve Pentecostal and Charismatic Christians. There were 981,000 of these souls in 1900; there are 643,661,000 of them today; and there are projected to be over one billion Charismatics and Pentecostals in 2050. In raw numbers, then, Charismatic and Pentecostal Christianity is the fastest growing phenomenon in world religious history."

Christianity is changing. The center of gravity has shifted.  And if you have experienced Methodism in the global South, you know that it has more in common with what we would consider Pentecostalism than the theology and practice of most North American United Methodist congregations.
___
The entire post can be read here.
Posted by Allan R. Bevere at 12:30 PM