Christianity Turning Secular: It's About Convenience and Being Trendy 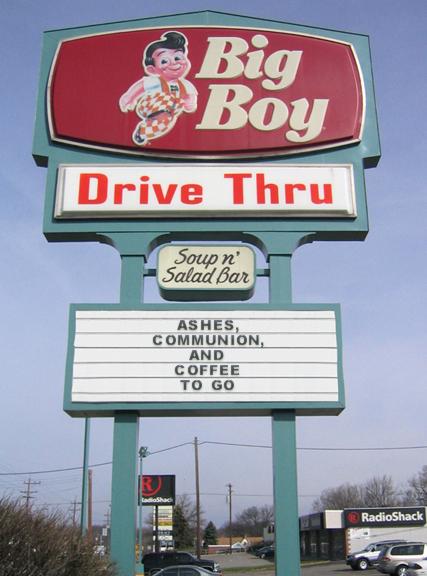 This week I read two articles that seem to capture the contradictory impulses of this present age. The first reported that Christ United Methodist Church in Shreveport is offering "Ashes to Go" services on Ash Wednesday. This will allow people simply to receive the ashes in their cars for a kind of "drive-thru" shriving. In the second, David Brooks argues that secularism must in the future become more enchanted, more sensitive to the transcendent, if it is to flourish.


The two articles send two different messages. In the one, religion is being disenchanted and secularized. In saying that, I am not making a statement about the dogmatic position of the church in Shreveport. I do not know the minister or the congregation at all. They may well sincerely believe in the traditional doctrines of Christianity. Further, as a staunch Presbyterian, I do not have sympathy for Ash Wednesday services anyway. But I am interested in the larger significance of this silliness: When a church reaches the point that its worship can be delivered like a cheap burger at a fast food restaurant, it has long ago lost all sense of mystery and awe. And if it cannot even inspire congregants to step out of their cars, it is indubitably incapable of inspiring any passion or commitment. Such drive-thru redemption is surely typical of the most basic religious dogma of our day: We believe our religion, like our entertainment, should be permanently on-demand and yet perennially undemanding.

By way of contrast, David Brooks points out that current forms of secularism need to change. They need to develop a sense of the sacred and the transcendent if they are to inspire passion and have any cultural stamina. The current secularism which he describes is indeed rather bland: Polite middle-class mores, shorn of metaphysical assumptions, where being kind to each other is the whole of the law. This, he argues, cannot continue indefinitely because it does not address humanity as it really is. Human beings are emotional, passionate creatures, and for any creed to survive, it must take this into account. We want-- we need-- transcendence and the sacred. The current secularism of the trendy urban neighborhoods and the leafy suburbs is simply too prosaic to possess lasting appeal.
___
The entire must-read post is here.
Posted by Allan R. Bevere at 3:49 PM