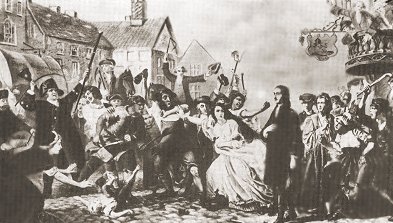 from the Christian History Institute:
___
After preaching at Oakhill about noon, I rode on to Shepton, and found them all under a strange consternation. A mob, they said, was hired, prepared, and made sufficiently drunk, in order to do all manner of mischief….After we were gone into the house, they began throwing great stones, in order to break the door; but perceiving this would require some time, they dropped that design for the present. They first broke all the tiles on the pent-house over the door, and then poured in a shower of stones at the windows. One of their Captains in his great zeal, had followed us into the house, and was now shut in with us. He did not like this, and would fain have got out; but it was not possible. So he kept as close to me as he could, thinking himself safe when he was near me. But staying a little behind, when I went up two pair of stairs, and stood close on one side, where we were a little sheltered, a large stone struck him on the forehead, and the blood spouted out like a stream. He cried out, 'O Sir, are we to die to-night? What must I do? What must I do?'
___
Wesley's entire entry in his journal on that day can be found here.
Posted by Allan R. Bevere at 4:30 PM