Offering Pastoral Care When Things are Out of Control 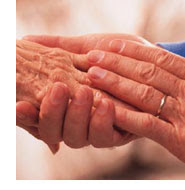 Many years ago when I was a young associate pastor, there was a parishioner who was all of 4 foot 3 inches tall. She was Italian (like me) and she was a pistol. A couple of her fellow parishioners referred to her as a "test," She often challenged them in their discipleship as she accused them of stealing things and committing other unsavory deeds. "Maria" (as I will call her) was quite a piece of work, but I liked her. She kept us on our toes.

Over time we began to notice that Maria was deteriorating mentally. One day we received her monthly contribution in an envelope sewn shut with needle and thread. Eventually, her only living relative, a nephew, had her committed to a nursing home because she clearly was unable to take care of herself.


I would visit Maria in the nursing home on regular occasions. When I would enter her room, there was only one thing on her mind. She wanted out! She would see me and say, "Allan, I am glad you are here. Bring your car around to the back and come get me. We will get some lunch and then you can take me home." As far as Maria was concerned it was a jail break and I was the one providing the wheels to get her out of town. At first I would tell her that was not the reason I was there. As far as she was concerned, it was the reason I was there, and I would not tell her otherwise. I would then try to change the subject, but she was singularly focused. I did my best to speak with her, but all she wanted was to get out of there and I represented her freedom. Finally, in frustration I would pray for her and then tell her I was getting the car... and then I would just leave. Every time I visited her after that, she would never remember that I had just left her, but she was always ready to get out of there and I was not going to dissuade her.

That was almost thirty plus years ago. Maria has been gone for a while now. I cannot say that I did everything I could have as her pastor. I still wonder if I could have done some things different. After over thirty years in ministry, there are times when I am not quite sure what to do in a difficult situation, but I know that I must do my best to embody the presence of Jesus Christ in each and every opportunity presented to me.

I also know this-- We the followers of Jesus are called to care for those in need even when the demands of ministry do not go the way we think they should. I had too many routine nursing home visits; Maria forced me out of the routine and made me think once again what it meant to be a presence to one whose thoughts were in a time and place where only God could enter.

After all these years, I still think of Maria and how, in her dementia, she kept me on my toes; and how she made me think long and hard of what it meant to do ministry in a context where I had no idea what is going to happen next. It is the surprises of ministry that teach us the most, if we are willing to be taught, and if we are willing to do ministry out of control.
Posted by Allan R. Bevere at 7:00 AM

Email ThisBlogThis!Share to TwitterShare to FacebookShare to Pinterest
Labels: Ministry