Hypocrisy Files: Freedom of Speech Only Applies to Satire That Is Religiously Bigoted 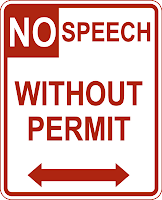 What happened in Paris last week was terrible. Freedom of expression is critical for free societies and that includes humor that some may find offensive. I have nothing but disdain for anyone whose view of religion includes targeting and killing those who give offense through words or pictures. But let's be honest, not all offensive expressions are equally free in Western democracies. David Brooks rightly notes in the New York Times:

Americans may laud Charlie Hebdo for being brave enough to publish cartoons ridiculing the Prophet Muhammad, but, if Ayaan Hirsi Ali is invited to campus, there are often calls to deny her a podium.

So this might be a teachable moment. As we are mortified by the slaughter of those writers and editors in Paris, it's a good time to come up with a less hypocritical approach to our own controversial figures, provocateurs and satirists.


I believe people have a right to say what they want but that doesn't mean they should. If these same people had been publishing cartoons demeaning women, homosexuals, racial minorities, or the poor to the same extent that these cartoons demeaned Islam and its believers there wouldn't be a single person talking about bravery. They would be talking about how bigoted and inappropriate the work was and how people should boycott the magazine. I feel for the people killed and all of the others who were affected by the terrible events of the last few days. I cannot, however, stand quietly while they are lionized for profiteering on prejudice.

Chuck is indeed right; one person's satire is another person's bigotry. I used to enjoy satire, but social media has destroyed it for me... and David Brooks is also right, when he states,

Healthy societies, in other words, don't suppress speech, but they do grant different standing to different sorts of people. Wise and considerate scholars are heard with high respect. Satirists are heard with bemused semirespect. Racists and anti-Semites are heard through a filter of opprobrium and disrespect. People who want to be heard attentively have to earn it through their conduct.

Those who were killed at Charlie Hebdo are indeed victims and those who slaughtered them are guilty of murder, but let's refrain from so casually turning victims into heroes. William Cavanaugh writes,


In the reaction to the massacre... those who died at Charlie Hebdo have been claimed not only as victims but as heroes and martyrs for free speech and tolerance. This makes me uneasy. Not every victim is a martyr, and one does not become a hero simply by offending people. Hustler's Larry Flynt did not make himself a hero of free speech by running cartoons of women being gang raped as "entertainment."

Indeed. Freedom of expression doesn't work when we safeguard that freedom only for those expressions that do not offend us.
Posted by Allan R. Bevere at 7:00 AM