A Positive Voice Among the Chicken Littles of the World 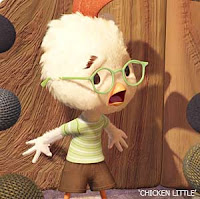 Michael Kruse, who blogs over at Kruse Kronicle, is a welcome alternative to all the Chicken Littles in the world. Sure, there's lots of bad stuff happening each and every day on our blue green ball of Terran dust, but there's so much conventional wisdom out there that is simply wrong because it does nothing more than parrot the talking points of the influential but uninformed. Michael writes,


Most people are exceptionally illiterate about the trajectory of demographic and economic changes in the world, believing the world is decaying. That leads many to disengage in hopelessness. In reality, globalization combined with investment in human capital and infrastructure has put extreme poverty in rapid retreat. The global poor are not getting poorer. The world is getting better!


I have continuously pointed to evidence of these developments through social media for more than a decade. Not infrequently, posts about positive trends are met with incredulity and even anger. How can I speak of an improving world when so many are suffering? It is as if nothing positive may be acknowledged until total success is achieved. Yet it is the relentless focus on the negative, attempting to shame and guilt people into action (many times with distorted and exaggerated data) that actually drives people away from action into donor fatigue and hopelessness. There must be hope that things can get better.

A recent guest preacher recounted a scene from the end of Schindler’s List. Schindler, who saved 1,200 Jews from the Nazis, reproofs himself as realizes that if he had sold his car or other possessions, he might have saved at least one more person. He finds himself in a difficult place. How can he celebrate the lives saved when so many still died? But how can he not celebrate 1,200 lives that were indeed saved?

Endless fixation on the negative leads to despair and diminishes the value of lives that have improved. Such fixation is unwarranted and counterproductive, and that is why I will continue to press on with stories of hope and improvement. We need balance. We need hope. And based on the Barna data below, there is much work to do.

He also posts the following infographic:

My own take on all of this is that the talking heads in the media need to play up the negative because otherwise we will find other things to do than listen to them drone on incessantly. The politicians need to continue all the negative nattering nabobbing so they can be elected to be in power and then re-elected to stay in power.

Thanks Michael, for keeping the good stuff before us... and the next time I'm in Kansas City, let's get some barbecue.
Posted by Allan R. Bevere at 11:54 AM

Got a Z-Man waiting with your name on it. ;-) Thanks