A Case of Mistaken Identity: Reflections on the Parable of the Prodigal Son (Part 2 of 10) 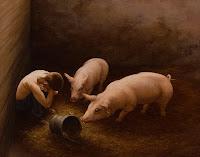 So, off goes the young son foot-loose and fancy-free to live his life, to forge his own destiny. He leaves dad and the family farm for the bright lights and the big city. With loaded debit card in hand, he no doubt finds new friends ready and willing to help him spend his money-- and spend it he does; but he doesn't just fritter it away in fancy restaurants and on luxury items. "He squanders his wealth in immoral living." St Augustine states "To be in the realm of lustful passion is the same as to be in the realm of darkness" (Confessions 1.18).


How true it is that just when we think we are in control of our lives, the circumstances of life awaken us from our illusions and confront us with the facts. A severe famine strikes and this wayward young man has nothing to sustain him; even worse, he had nothing to sustain him when he had his wealth, for the real famine is in his soul.

It is sad but true that sometimes we have to hit rock bottom before we can come to our senses. There is, of course, no guarantee that we will. In the thirty years that I have been a pastor, I have seen more than a few individuals sink so low that they could take their place beside the prodigal son in the pig sty; and even at the bottom, they continue to live senseless lives. But in the midst of the nonsensical, it is possible to find rationality; and in the foolishness, wisdom waits...
Posted by Allan R. Bevere at 7:00 AM