So, Just What Is an Executive Order? 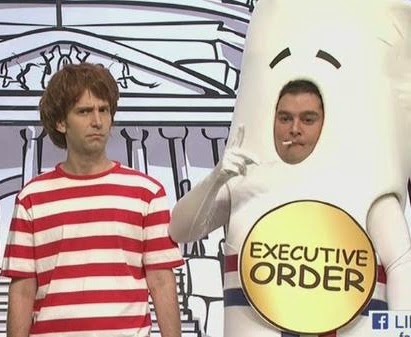 In the midst of the hoopla over President Obama's recent executive order on immigration, many people by and large have chosen their predictable sides as to whether or not the president's actions are constitutional. But I have to say, I've seen very little from the social media chattering class on exactly what an executive order is. The legal dictionary online states the following:


A presidential policy directive that implements or interprets a federal statute, a constitutional provision, or a treaty.

The president's power to issue executive orders comes from Congress and the U.S. Constitution. Executive orders differ from presidential proclamations, which are used largely for ceremonial and honorary purposes, such as declaring National Newspaper Carrier Appreciation Day.


An executive order is a specific power of the president and the executive branch as provided by the US Constitution in Article II, Section 1. This power allows the president of the United States (POTUS) the authority to create laws or determine how existing laws should be carried out. It always has to do with domestic affairs; executive agreements govern foreign affairs. Pretty much any issue in domestic affairs is fair game for such an order, except for those things that would impinge upon congressional powers, like the regulation of interstate commerce. Executive orders can be simple things like declaring a new National Holiday or a day designated to a special event, like “Take your Child to Work Day.” Since Bill Clinton’s presidency, these noncontroversial orders have been given a new name: Presidential Decision Directives.

The rub on executive orders has to do with the words I italicized in the previous block quote: Pretty much any issue in domestic affairs is fair game for such an order, except for those things that would impinge upon congressional powers... Does President Obama's most recent order impinge upon congressional power? If the answer is no, then the executive order is in order; if not, the president has overstepped his constitutional authority. The only way for that to be determined is through the courts by way of a lawsuit.

So, that's an executive order in a nutshell. But if you would like a more comical and entertaining version of executive orders, you can watch the video below courtesy of Saturday Night Live.