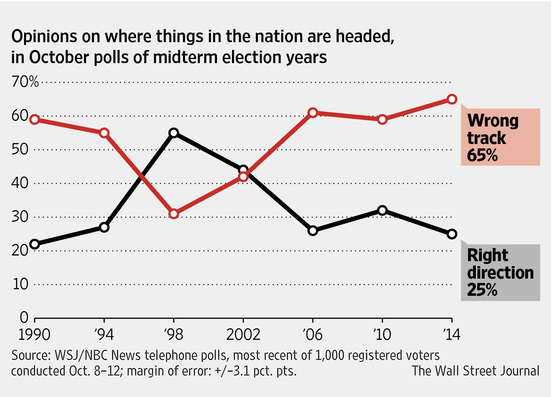 According to the Wall Street Journal, Americans are now entering into their second decade of a gloom march in which, except for a couple of times, Americans believe the country is on the wrong track. Elizabeth Williamson writes,

"Why are people so gloomy? Well, it might just be everything," says pollster Micah Roberts, sounding a bit like Eeyore himself. Mr. Roberts is vice president of Public Opinion Strategies, which along with Hart Research Associates conducted the poll. "We haven't had a plurality saying ‘right track’ in over ten years so that's pretty amazing. After 10 years it's just part of the collective consciousness of Americans," to think the nation’s gone off the rails, he added.

Even those who said they thought the nation was on the right track seemed to doom the future with faint praise.

While I don't want to discount the work of the pollsters, I can't fail to mention that there is another reason... and I think it is a big reason... for the making of doom and gloom in society-- the 24/7 cable news cycle in which in order to capture ratings, news stations are constantly and incessantly reporting and focusing on every major news story making it more newsworthy than it actually is. (Neighbor, can you say "Ebola"?).

I used to be a news hawk spending way too much time reading it on the Internet and watching it on television. Several years ago, I quit... and my mood immediately changed. The only news I catch is in the morning, at some point. I get online and read the latest headlines and delve into only those reports I am truly interested in. So I stay informed, but I do not allow the talking heads and political pundits to drive my day and my mood. It's been liberating.

I have a suggestion for my fellow Christians. Instead of getting up in the morning and catching the morning news, or even reading the blogs (including yours truly), begin your day with morning prayers. Christians have been doing it for centuries and it can center your entire day in a positive way.

After all, we have to start the day somehow.
Posted by Allan R. Bevere at 5:58 AM