Selfishness Is Central to American Politics 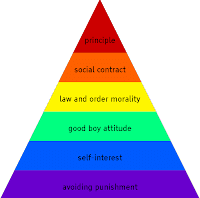 I agree with Ken Schenck:
___
In the political scene, "both sides" in their most public forms, it seems to me, are bent on pushing different forms of societal selfishness.


Both sides are wrong insofar as they are selfish. Those who want to provide for others are of course the more Christ-like, but be aware that the "founding fathers" were simply children of the Enlightenment with their rights language. Philosophy has moved on. Forgive me for believing that half of the US has an entitlement mentality-- as if any of us truly deserve anything.

We give to others not because anyone deserves it, but because we need to give.

Meanwhile, many have have developed a "You made your own bed, now lie on it" mentality. This is my stuff. I can do whatever I want. From a Christian standpoint, that's hogwash too. Nothing belongs to us. Everything belongs to God.

Remember that a "law and order" mentality, one that is oriented around rules, is an inferior stage of moral development (one that half of "Christian" America is stuck in).
___
His entire post can be read here.
Posted by Allan R. Bevere at 1:00 PM