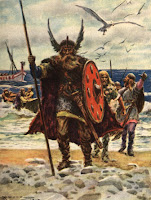 Just how bad were the Vikings?

[Anders] Winroth is among the scholars who believe the Vikings were no more bloodthirsty than other warriors of the period. But they suffered from bad public relations-- in part because they attacked a society more literate than their own, and therefore most accounts of them come from their victims. Moreover, because the Vikings were pagan, they played into a Christian story line that cast them as a devilish, malign, outside force.

"There is this general idea of the Vikings as being exciting and other, as something that we can't understand from our point of view-- which is simply continuing the story line of the victims in their own time," Winroth says. "One starts to think of them in storybook terms, which is deeply unfair."

In reality, he proposes, "the Vikings were sort of free-market entrepreneurs."
___
The entire article from National Geographic can be read here.
Posted by Allan R. Bevere at 3:00 PM