Letting God Off the Hook: Adam Hamilton on Violence in the Old Testament (Part 2) 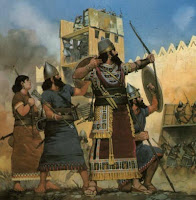 This is the second post by my friend, Dan Hawk on Adam Hamilton's recent proposals about how to understand and make sense of the violence in the Old Testament when it comes to the character of God. Dan's first post as well as links to Pastor Adam's posts on the subject can be found here. Originally Dan had planned to write a two part series, but he has written a final third part in which he reflects theologically on the violence in the Old Testament. That post will be published tomorrow morning.
___

Resolving the Dilemma: A Response to "God's Violence in the Old Testament," Part 2.
by Dr. L. Daniel Hawk

In the previous post, I took issue with Adam Hamilton's proposal that we deal with the question of divine violence in the Old Testament by regarding the texts that report it as "a reflection of the values and the theological and moral vision of some of its human authors, not of the God they sought to serve" ("Part 3: Possible Solutions"). I raised two problems with this approach. First, it deals with the problem by creating two gods, the humanly-contrived violent god versus the God revealed in Jesus, and so opts out of grappling with the canon's challenge to see Jesus and the God of the Old Testament as one and the same. Second, it rests on a historical sensibility that grounds claims about what the Bible says in putative historical contexts and modern analyses of ancient minds, both of which are very slippery enterprises.


I now turn to the task Hamilton undertakes, "to resolve the moral and theological dilemmas that confront us in these Old Testament texts" ("Part 2: Possible Solutions").

We agree on this: the God who commands and endorses violence in the Old Testament, sometimes on a massive scale, is inconsistent with the God we see in the life and teachings of Jesus. Where we disagree is on what we should do with the inconsistency. Hamilton wants to resolve it. I believe we are called to confront it head on, as a feature of the whole of Scripture and a challenge to participate in a complex, contentious conversation about who God is and how God is at work in the world. By disengaging from this challenge, we give up too easily, and we give up too much.

I understand the temptation to resolve the incompatible portraits of God we encounter in the Bible. We live in a culture and age that wants answers and explanations. We seek reassurance that all the dots can be connected, and we want to know how they are connected. We look for certainty and clear, clean delineations of right and wrong. We cannot abide ambiguity, contradiction, and paradox. We demand that God make sense to us.

The Bible, however, confounds, provokes, and frustrates our demands and the thinking beneath them. Moral and theological ambiguity is part and parcel of its testimony. God asks Abraham his faithful servant to sacrifice his son, then stops him at the last minute. God repeatedly insists that Israelites show no mercy to the Canaanites when they enter the land, but says and does nothing when Israelites spare a Canaanite prostitute’s family and an enclave of Hivites. God accedes to the nation's demand for a king, chooses one, seemingly sets him up to fail, and then chooses a different one. God destroys in order to renew, at the beginning of the Bible (the Flood) and at its conclusion (Seals, Bowls, Trumpets and an orgy of cosmic violence).

The Bible does not speak in a monologue. It confronts us with a vigorous and combative argument, carried by diverse voices with starkly different perspectives, between books and within them-- and allows all to have their say. It exposes our pretensions to absolute moral rectitude by revealing the world we live in as a place where moral decisions are not often clear-cut and where even God must act in ways that counter the ideals God sets before humanity. The pastoral task, I suggest, resists the impulse to defuse the offensive voices but rather invite readers to participate in this confrontational rhetorical and moral discourse, so to determine how to live and respond faithfully to the dilemmas that arise in the sin-saturated world we inhabit. Resolving its inconsistencies transforms the biblical witness into a monologue. It flattens theological reflection. And it so settles issues for us that we need not continue to pray and discern the work of the One who is working relentlessly and resolutely to redeem a world gone bad.

"After we have done our best work and vigorously pursued our most passionate modes of reading," Walter Brueggemann has aptly written, "the text-- and the God featured in the text-- remain inscrutable and undomesticated." The attempt to make coherent sense out of the Old Testament material "is characteristically hazardous because our explanatory modes of discourse run immediately in the direction of idolatry, of producing a God who is discernible, explicable, and therefore to some extent manageable" (Old Testament Theology: An Introduction, Abingdon Press, 2008, page 18).

On the question of divine violence as in so many others, the canon calls faithful readers out black-and-white thinking and into the gray; out of an impulse that seeks to simplify, dichotomize, and resolve in order to determine who is right-- and into a communal conversation as fluid and contentious as the clamor of voices that vie with one another in the biblical canon. The plurality of voices, postures, testimonies, and declarations that configure Scripture reflect the diversity of the same that characterize the church. The very nature of Scripture, then, directs the community shaped by it to seek the truth from all sides and prayerfully ponder together what God is doing in any given day and age and so to align its witness and involvements accordingly.
___
Dr. L. Daniel Hawk is Professor of Old Testament and Hebrew at Ashland Theological Seminary. He has his Ph.D. from Emory University. Dan is an ordained Elder in the United Methodist Church (East Ohio Conference) and has researched and written extensively on the Book of Joshua. His books include a commentary on Joshua in the Berit Olam series, Joshua in 3-D: A Commentary on Biblical Conquest and Manifest Destiny, and Every Promise Fulfilled: Contesting Plots in Joshua.
Posted by Allan R. Bevere at 6:00 AM

Thanks for this second post and ongoing discussion. What I glean (in part) from this post is an important reminder to not oversimplify or too quickly attempt to resolve challenges and difficulties in the biblical witness. N.T. Wright has written something similar:

"If we really engage with the Bible in this serious way we will find, I believe, that we will be set free from what verges on small-scale evangelical paranoia about scripture. We won’t be forced into awkward corners about whether scripture is exactly this or exactly that. Of course the Bible is inspired, and if you’re using it like this there won’t be any question in your mind that the Bible is inspired. But, you will be set free to explore ways of articulating beliefs which do not fall into the old rationalist traps of 18th or 19th or 20th centuries.

Further, you will discover that the Bible will not let you down. You will be paying attention to it rather than sitting in judgment over it—not coming to it with preconceived notions of what this or that passage has to mean if it is to be true. You will discover that God is speaking new truth through it. I take it as a method in my biblical studies that if I turn a corner and find myself saying, ‘Well, in that case, that verse is wrong’ that I must have turned a wrong corner somewhere. But that does not mean that I impose what I think is right onto that bit of the Bible, either. It means, instead, that I am forced to live with that text uncomfortably, sometimes literally for years, until suddenly I come round a different corner and discover that the verse makes a lot of sense; sense that I wouldn’t have got if I had insisted on imposing my initial view on it from day one."

One more note. Allan, I agree that a Christological reading of scripture reminds us that God is intimately involved in human history in all of its messiness and violence. I believe this approach also means that our storied life in God, from Genesis to Revelation, informs and shapes our understanding of texts like the OT accounts of violence. It reminds us of where we have been and where we are headed. Ultimately that salvation story calls for our obedience to the Lordship of Jesus Christ and cannot be fully understood apart from his life, teachings, death, and resurrection (ie. "you have heard it said ... but I say to you")

"Nor do we read the gospels us though we were ignorant of the fact that they are written precisely in order to make the transition from Act 4 (Jesus’ ministry) to Act 5 (the Church), the Act in which we are now living and in which we are to make our own unique, unscripted and yet obedient, improvisation. This is how we are to be the church, for the world. As we do so, we are calling into question the world’s models of authority, as well as the content and direction of that authority."

I really appreciate these posts in response to Adam Hamilton's work. I have been studying some of these same issues in David Lamb's book "God Behaving Badly: Is God Angry, Sexist, and Racist."

In some ways he also falls into the trap of defending God (hard not to I suppose) but we must engage these scriptures and not dismiss them or ignore them or we lose something of the nature of God, and or our ability to authentically engage with people who question the source of our faith story.

Kevin, your comment on our storied life is well-said. The dialectical way we approach this topic has its roots in the Deists' challenges of the 18th Century. The Church has been in reaction mode ever since. Wright gets this. I resonate with his work to reclaim an authentic biblical/theological way of thinking. Eric, I agree with you about Lamb's impulse to defend God. He reflects how pervasive the Dialectic is for the way we talk about the God of the Bible. Did you notice that each of his chapters states a dichotomy?

I believe this approach also means that our storied life in God, from Genesis to Revelation, informs and shapes our understanding of texts like the OT accounts of violence. It reminds us of where we have been and where we are headed.

Thanks for sharing this post. It is very helpful and informative as I struggle to understand God, both God's action and God's nature. And as someone who tries fervently not to create God in my own image, I find this analysis useful and comfortable. I can live with the ambiguity and be open to the discovery and not feel that I have to choose between turning swords into plowshares, or taking up arms. This leaves me very hopeful.