The Increasingly Narrow and Often Obscure Values of the Academy 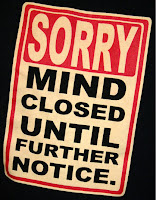 from a commencement address by Stephen L. Carter:
___
Members of the Class of 2014, I salute you. My warmest wishes on the occasion of your graduation from this fine institution.

And, before I go any further, I would like to express my personal thanks to all of you for not rescinding my invitation. I know that matters were dicey for a while, given that I have held and defended actual positions on politically contested issues. Now and then I've strayed from the party line. And if the demonstrators would quiet down for a moment, I'd like to offer an abject apology for any way in which I have offended against the increasingly narrow and often obscure values of the academy.


In my day, the college campus was a place that celebrated the diversity of ideas. Pure argument was our guide. Staking out an unpopular position was admired-- and the admiration, in turn, provided excellent training in the virtues of tolerance on the one hand and, on the other, integrity.

Your generation, I am pleased to say, seems to be doing away with all that. There's no need for the ritual give and take of serious argument when, in your early 20s, you already know the answers to all questions. How marvelous it must be to realize at so tender an age that you will never, ever change your mind, because you will never, ever encounter disagreement! How I wish I'd had your confidence and fortitude. I could have spared myself many hours of patient reflection and intellectual struggle over the great issues of the day.

Given your generation's penchant for shutting down speakers with whom you disagree, I am assuming that you have no intention of playing any serious adult role in mediating those conflicts. And that's fine. We should leave the task of mediation to those unsophisticated enough to be sensitive to the concerns of both sides.

Besides, you will face more important problems. Once you depart the campus, the world will make unjust demands on you. You will have to work for a living. You will have to put up with people whose views you despise. Fortunately, as long as you don't waste precious time reflecting in a serious way on the issues of the day-- or, worse, contemplating the possibility that you might be mistaken on a question or two-- you should have plenty of hours for Twitter and Google Hangout and the nonstop party that every truly just society was meant to be.

Then there are your fellows at Rutgers University, who rose up to force the estimable Condoleezza Rice, former secretary of state and national security adviser, to withdraw. The protest was worded with unusual care, citing the war in Iraq and the "torture" practiced by the Central Intelligence Agency. Cleverly omitted was the drone war. This elision allows the protesters to wish away the massive drone war that President Barack Obama's administration has conducted now for more than five years, with significant loss of innocent life. As for the Iraq war, well, among its early and enthusiastic supporters was-- to take a name at random -- then-Senator Hillary Clinton. But don't worry. Consistency in protest requires careful and reflective thought, and that is exactly what we should be avoiding here.
___
The entire address can be read here.
Posted by Allan R. Bevere at 1:33 PM