Orthodoxy and Heresy, and the Necessary Interplay Between Doctrine and Mission 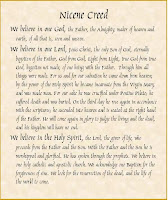 Scot McKnight has written an excellent post on the proper and improper use of the term heresy. There is no doubt that some Christians throw the term around quite loosely and dangerously, while others reject the importance of the word altogether. Others have attempted to redefine the term to support their own agendas, such as heresy doesn't involve what one actually believes, rather it is used only for people who disrupt the unity of the church. It is indeed true that heresy does cause such disruption, but it is not the disruption that is heresy, but the heretical beliefs that lead to disruption.


Scot starts with two inappropriate ways that the term is used:

First, there is the slipshod use: a "heretic" is used here for anyone who doesn't believe something we might think important. As when someone uses this term for someone who is amillennial or a preterist or a partial inerrantist or paedobaptistic or trans-substantialist … or a host of other things.

Those who use the term for such things ought to stop. It is unfair, it is volatile, and it really does damage to what is central to the faith and what is not. When I hear someone call another a "heretic" for something that is not central to our faith, I wonder more about the name-caller than the one being name-called. It tells us something about a person to hear them pronounce such denunciation and damnation on someone who genuinely is a believer.

Second, there is the extended use: a "heretic" is used here for anyone whom someone else thinks is skirting with danger on a central theological concept. I hear this at times about those who affirm the New Perspective with respect to Justification by Faith. There are a variety of topics here-- including one's theory of the atonement, one's view of Jesus' self-consciousness, one's view of Scripture … or one's view of Hell and final judgment.

The term "extended" refers to someone’s theological claims to suggest that, if they were to follow through in their logic (which as often as not they don't), they will end up with some belief that is inherently no longer orthodox. Sometimes this is true. Example: some of those who deny final judgment end up denying a host of things-- like God's holiness or the ultimacy of Christ and the like-- but some don't, and we need to let each person speak for him- or herself.

Scot then defines what heresy actually is and the character of heresy.


Third, the proper use: a "heretic" is someone whose teachings or beliefs "undercut the very basis for Christian existence". I here quote my friend and former colleague, Harold O.J. Brown's book, Heresy.

Most importantly, heresy pertains only to the central doctrines of God and Christ. Heresy is established by orthodoxy and orthodoxy was established by the classical creeds (Nicea, Chalcedon, etc). Brown once told me a heretic is someone who denies something in the classic forms of Christian orthodoxy, such that orthodoxy and heresy are mirror terms. That is, one is a heretic if one teaches what has already been judged to be heretical-- say, docetism or Arianism.

Here’s the rule on the proper use of the term "heretic" or "heresy": anything that denies Nicea or Chalcedon, etc., is heretical; anything that affirms them is orthodox. We should learn to use the term for such affirmations or denials.

I once had a conversation with Kallistos Ware about the topic of heresy and he told me something I value:

No one can be called a heretic until they have been informed by a proper authority of a theological error,

until that person has understood what she or he is teaching, and

only if the person then continues to teach such an idea.

So the proper ingredients of the heresy accusation is: 1. An authority, 2. Explanation and confrontation of the error, and 3. Refusal to change one's teaching. What is often the case today is that #1 is seized beyond one's recognized status; in other words, one usurps the position of authority and then pontificates from that usurpation.

I would add to this, Alister McGrath's definition of heresy as an attempt at orthodoxy that has failed. He writes,


A heresy is a doctrine that ultimately destroys, destabilizes, or distorts a mystery rather than preserving it. Sometimes a doctrine that was once thought to defend a mystery actually turns out to subvert it. A heresy is a failed attempt at orthodoxy, whose fault lies not in its willingness to explore possibilities or press conceptual boundaries, but in its unwillingness to accept that it has in fact failed.

This quote captures well the reasons why the categories of orthodoxy and heresy are necessary. It is important to note of first importance is that all religions have orthodoxy and heresy as operating categories. Indeed, McGrath notes that every worldview, religious and secular, holds to both concepts. In biology, for example, Darwinianism is orthodox. A rejection of such Darwinian evolution is heretical; for it tears at the very fabric of the modern scientific endeavor and how we have come to understand the world rendering its inter-related investigations unintelligible. In the same way, political parties too have their "orthodoxies" and "heresies," which may indeed shift from time to time, but they are there nonetheless. Current Republican orthodoxy centers around low taxes, while increased government spending is an orthodox doctrine among Democrats. In others words, orthodoxy and heresy are about drawing boundaries; for without them groups have no identity nor do they have guidance on how to proceed in their endeavors, whether they are religious, political, or scientific.


McGrath notes that in theology, doctrine "preserves the central mysteries at the heart of the Christian faith and life" (p. 30). That these central affirmations are mysteries is important. Doctrine is not, nor has it ever been, an attempt to explain and understand God exhaustively, as if that were possible. When St. Augustine says that if we can explain it, it isn't God, he is not suggesting that theological investigation and doctrinal explications are insignificant and unimportant. He is reminding us "that the human mind struggles and ultimately fails, to cope with the grandeur of God" (p. 29). But while our doctrine cannot disclose God exhaustively in his grandeur, it can and must disclose God decisively in his character.


It should be stated, at this point, that the Christians who promoted their doctrines that would ultimately be declared as heretical were not attempting to destroy the Christian faith. Indeed, they often believed they were offering an orthodox vision that was superior to the current orthodox position. So, this was not a matter of good vs. evil or orthodox saints in conflict with heretical sinners. The orthodox/heresy question centers around what is true and what promotes the faith as once for all delivered to the saints, as opposed to what ideas will ultimately destroy that faith. It must be said again that we would not know orthodoxy had some not promoted what would become heresy.


It is also important to note that heresy has serious implications for the mission of the church in the world. Those who bifurcate doctrine and mission miss the essence of both. McGrath argues that the Christians in the early centuries faced three threats: 1) persecution, 2) intellectual or religious assimilation, and 3) fragmentation through intellectual incoherence. The last two dangers are critical for understanding the idea of heresy. The danger of assimilation concerned the necessity of the church remaining "salty," according to Jesus in the Sermon on the Mount (Matthew 5:13). The decisive character of Christianity and its mission in the world depended upon its distinctiveness. "Cultural assimilation is all too often the prelude to ecclesial extinction" (p. 85). The danger of fragmentation threatened Christianity as something that would become intellectually shallow. The leading critics of Christianity in the earliest centuries (e.g. Celsus in late second century and Galen of Pergamum in the mid to late second century) claimed that its central doctrines could not be taken serious by intellectual and cultured people. The fragmentation caused by heretical conceptions exacerbated the problem as "[h]eretical conceptions of faith, it was argued, lacked the rigor of their orthodox equivalents (p. 86).


It was not the case that all heretical conceptions lacked intellectual sophistication, but what they did lack was coherence with the essential doctrines and affirmations of the faith. Such incoherence left Christianity "seriously vulnerable to intellectual criticism on the one hand and cultural erosion on the other (p. 86).


For Wesleyans, sound doctrine is important first and foremost because it is necessary for the practice of the faith and the church's mission in the world. Historically Wesleyans are not "heretic hunters" as some (certainly not all) of our Reformed sisters and brothers. Rather, our concern for orthodoxy is that without it we cannot have orthopraxy. Indeed, that I even have to draw a distinction between the two reveals our current modern context that distorts both.
Posted by Allan R. Bevere at 7:24 AM