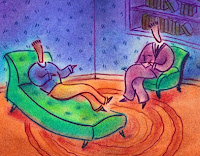 One of the things I have become conscious of as a preacher is how much of myself gets poured into a sermon. That, of course, is understandable. It is impossible for preachers to separate themselves from who they are, their interests, and what's important to them.

At the same time, preachers also need to be mindful that the sermon is not about themselves. They must preach on, as John Wesley said, the whole tenor of Scripture, the entire counsel of God, which also means dealing with issues that are not particularly of personal interest. Preaching is a discipline that requires preachers to move beyond themselves, to grow as they preach, and to speak above and beyond our individual interests.


As someone who has been blogging now for going on ten years, it is also clear to me how much of myself enters into my blogging. I simply cannot separate my blogging from who I am, but I must also be mindful that there is more to be gleaned in life and study than my own personal interests and pet peeves. That is not always easy to do. It is easier for me to write on subjects I am passionate about, particularly those things that irritate me, than other topics that I do not find significant.

I sometimes wonder how much blogging is a kind of public therapy, and if that is not always a healthy thing. I have read bloggers who are former liberals turned conservative. It seems that most of their posts are nothing more than getting back at liberals for their oppressive liberal upbringing. I also read bloggers who grew up in a conservative setting whose posts are always going after fundamentalists. It's seems almost as if their criticism of such groups is their way of coping with what they perceive as experiencing an abusive childhood. And it's not just conservatives or liberals. I can cite examples of Christians who were atheists, atheists who were Christians, Catholics who were Protestants, and Protestants who were Catholics, et al. I would never suggest that the discussion and critique of these various positions are unimportant. Indeed, let's have at it. But I must confess, that I wonder if some bloggers are using their blogging more as public therapy to escape or at least cope with their perceived "oppressive" past than to truly engage in the necessary discussion between those who disagree. I wonder if they are just looking for sympathetic voices to confirm their now held views. The echo chamber is quite a nice comfort zone.

I offer these thoughts...well... because I was thinking them.
Posted by Allan R. Bevere at 6:00 AM

When I was blogging as "The Once and Future Methodist" I had on my masthead that these were, by and large, sermons to myself. Whether it was my thoughts on a bible study or what was going on in my life at that time (my wife was very ill at the time, with frequent hospitalizations and lots of home care issues) it served as an outlet for me. I suppose it comes down to the purpose of the blog. In my case, it was a form of therapy, letting me put down in writing what I was feeling and inviting others to comment or commiserate. But, I advertised that up front.

Indeed... I think blogging can also be a healthy kind of therapy for people. But as in anything, it can also become unhealthy.

Allan,
I am not a blogger, but a reader of a variety of bloggers, and I think you make some good points. This may feel like nitpicking, but I think it is an important point. You spoke of some who blog more as "public therapy to escape or at least cope with their perceived 'oppressive' past than to truly engage in the necessary discussion between those who disagree." My concern is with the use of the word therapy. I am a therapist. I have done thousands of hours of therapy. And the quote from you blog I cited above, well, it has nothing to do with therapy. When people are using something to escape or cope, it's not therapy. In fact, in many ways it the very opposite of what people are invited to do in therapy--face struggles in an honest, deep, and authentic way.

I think it is an important distinction to make, because to call it therapy is in some way to legitimize it. I know that's not what you are doing, but I thought it important to make the point.

I do think that blogging has the potential to be therapeutic in some way. I've encouraged people to write out thoughts/feelings in the therapy process. But when you post those thoughts, in some form, on the Internet as a blog. Well, I think it impacts its value.

Thanks for your helpful comments.

Perhaps it would be more appropriate to say that they are seeking confirmation of their convictions from others and they are certainly getting something emotionally helpful by their constant criticism of others.

One of the interesting things here is using catchy titles to attract readers. Therapy is one of those attention-getting terms. It has received many hits and has been picked up by other bloggers.

Nevertheless, you point is well taken, and I hope all who read the post will read your comments as well.

Thanks for letting me share, Allan. There has been a lot of discussion about a therapeutic mindset in our society/culture. And one result of that "mindset" has been the tendency to become a victim, blaming my problems on the events of the past. And to be honest, there are lots of people who do therapy that way. But for me, therapy is about a willingness and openness to being surprised. To look at what is happening from a viewpoint that is surprising enough to invite reflection and a different direction in life. The most daring and courageous people I know are the ones who come through my door and open themselves to this kind of challenge. And trust me to be with them even as I "submit" them to that challenge.
Hopefully that explains more about my response.
Again, thanks for letting me share.