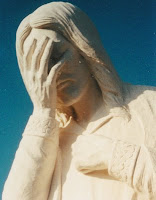 We have all seen the "things Jesus never said" memes on social media, and there are many of them as a Google image search demonstrates. Such memes are a way of offering a zinger to Christians with whom we disagree theologically, socially, and/or politically. And while such memes can be humorous, in reality they are also rather silly, and they help us avoid the intellectual rigor necessary in working through difficult theological and moral issues, in which the Bible can assist us, but not necessarily offer decisive answers. In other words, I am suggesting that those who resort to "the things Jesus never said" platform of argumentation have chosen the intellectually lazy route in order to make their point.

If it is the case that Jesus had a three year ministry, and I am inclined toward that view, then he certainly said more things that are given to us in the four Gospels. In fact, at the end of the Fourth Gospel the writer states, "But there are also many other things that Jesus did; if every one of them were written down, I suppose that the world itself could not contain the books that would be written" (John 21:25). While these words are an intentional exaggeration on John's part, the point is that Jesus had much to say, and it is impossible to remember it all.


I have always wished to know the things Jesus said that are lost to us. What might he have said that would assist us in working through some difficult theological or moral issues of our time? But as much as I would wish for it, it can never be. But it surely does not help matters in putting forth a position based on something Jesus never said. The reason for this should be obvious. There are all kinds of things Jesus did not say, but nothing of what has been left unsaid helps us move toward a position on anything. In fact, one can put forward a plethora of "things Jesus never said" memes that various folks in the "Jesus never said crowd" would object to strenuously:

Jesus never said, "There are only two sacraments."

Jesus never said, "They are not sacraments; they are ordinances."

Jesus never said, "I would never send anyone to Hell."

Jesus never said, "You get to decide who gets into Heaven."

It is true, of course, that we are not totally in the dark about Jesus and his theology and morality, but that can only be based on what Jesus did say and do, and what we know of his first-century Jewish context. And even though what we do know can illuminate us in reference to Jesus, there remains much ambiguity on many things. After all, we are attempting to peer back into history that is two thousand years old-- as far removed from us as Jesus was from Abraham.

It seems to me that the real challenge for the followers of Jesus after two thousand years is that we continue to wrestle with the things Jesus DID say and do; and after two millennia we struggle with appropriating the words and deeds of Jesus into our lives and in the corporate life of the Church, the Body of Christ. Offering memes of the things Jesus never said, that we get to make up in order to further our own agendas, does not assist us in embodying Christ to the world around us. Indeed, let me suggest that "the things Jesus never said" fad is in actuality a subtle way to ignore what Jesus has actually said by harping on what he didn't say in order to indict those who disagree with us and to bolster our faithful Christian creds to those around us, while ignoring the difficult and divinely transforming things Jesus did indeed say.

After all, didn't Jesus say, "You are my friends, if you do what I didn't command you (sarcasm on John 15:14). Won't it be great when we can stand before Jesus on Judgment Day and say, "Lord, I was a good and faithful servant in reference to everything you never said."

This is the Word of the Lord that was never spoken. Thanks be to God!
Posted by Allan R. Bevere at 6:30 AM

Thanks Allan that thought-provoking and insightful article. It provides a mouthful of food-for-thought.

The Jesus never said trend seems to be just one expression of the much broader trend of meaningless although witty "memes" that are all the rage on Facebook. They all do the same thing--express sides of a debate or a strong opinion without actually engaging in conversation that seeks truth and righteousness. Its like bumperstickers for people who don't like bumperstickers.

I respectfully disagree that this meme necessarily allows us to ignore Jesus's actual teaching. Rather, it uses sarcasm and subversive humor to encourage the reader to stop and consider the difference between what is actually found in Scripture and what is endemic in 21st-century American evangelical culture.

Not every example of this meme does this effectively, or even at all. But few memes are universally employed in the most effective way. And fewer memes cause the reader to stop and think about what Jesus (or Scripture generally) actually said.

Intellectually lazy? Not every theological point must be expressed in an exhaustively researched, footnoted article. While the resulting cartoons are often sarcastic and no meme should ever be mistaken for scholarly work, they can be helpful.

Besides, would you rather have this or grumpy cat?

Let me respectfully disagree. None of these memes are effective, and I can demonstrate that with every one. For example, "The meme of Jesus never saying to someone he couldn't heal him because he had a pre-existing condition. The meme assumes that those who have raised concerns about pre-existing conditions do not want people to receive medical treatment, when in reality they are raising the question of how to pay for such care, which is expensive. They are not necessarily lacking in compassion, they are asking the fiscally responsible question-- if we do this, how do we pay for it?

Or, take the one about Jesus never saying this is sort of like my body. We cannot push Eucharistic debates on to Jesus' words. The debate simply doesn't translate.

Those are two examples. I can give you more if you want.

And what I meant by intellectually lazy has nothing to do with scholarly work. I meant it is taking the intellectually lazy way out to keep from having substantive. debate-- "Here, let me give you this sarcastic zinger to demonstrate that you are not only wrong, but uncaring, mean, and hate sick children. End of discussion." That is often why such memes are posted.