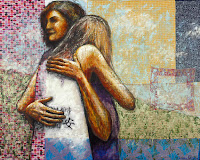 ...it must surely be admitted that the restoration of relationships requires not only forgiveness on the part of the offended but also the penitent willingness to be forgiven on the part of the offender. Thus R.C. Moberly interpreted the sacrifice of Christ in terms of the offering of perfect penitence by Jesus as the inclusive representative of all humanity.* The notion of inclusive representation responds to the need for a universal objective atonement. Some theologians will find this difficult and unnecessary, but certainly God's forgiveness comes alive for every sinner when he turns to God in penitence. The sign and effect of our willingness to be forgiven by God is our willingness to forgive others: the prayer 'Forgive us our trespasses as we forgive those who trespass against us' implies that the lesson of the parable of the unforgiving servant has been learnt (Matthew 18:21-35). To forgive those who have wounded us is to grow into the moral and spiritual likeness of God. 'Be merciful, even as you Father is merciful' (Luke 6:35-38): that is a translation of 'perfection'.**

These words from Geoffrey Wainwright remind us of the dangers of observing Lent in a rampantly individualistic Western culture. Lenten discipline can all too often degenerate into a self-centered spiritual navel gazing instead of being a further step along the way of discipleship of becoming centrally focused on Jesus Christ and oriented toward others. From Genesis to Revelation the Bible continues to remind us that our biggest problem as human beings is ourselves, our central focus is ourselves, and all too often we attempt healing and reconciliation and restoration through ourselves. Only in a self-centered society can books be written that are labeled "self-help."


One of the areas where our self-centered spiritual navel gazing comes into focus is in reference to forgiveness. As we examine our lives during Lent we seek forgiveness, as well we should. But forgiveness works both ways. We must not forget that Scripture not only comforts us with the possibility of our own forgiveness, but demands that we stand ready to forgive others. To forgive is indeed "to grow into the spiritual and moral likeness of God."

But forgiving can be difficult. We sure want to receive forgiveness when we know we need it, but to forgive those who ask us... that can be asking too much depending upon how greatly we believe we have been wronged. Perhaps our difficulty in forgiving is found in the unspoken assumption that the sins of others are more grievous than our own. Perhaps in a culture where it has become commonplace to demonize those who believe differently than we do, whose politics is other than our own, whose selfish motivations are labeled as nefarious whereas ours are simply mistaken... in that kind of culture it can be so very hard to forgive.

I reject accounts of salvation that are highly individualistic and framed in terms of self-fulfillment. The deeply ingrained human problem is that we are too much into ourselves-- and self-centered, self-fulfilling accounts of the gospel seriously undermine the central reason Jesus came to die-- to get humanity out of itself, to take our gaze off our own nakedness in Adam and Eve-like fashion and return our vision heavenward. Reconciliation is impossible when human beings are too busy examining their own spiritual navels, focused only on what they believe they want and need. Just as the alcoholic cannot get help until she realizes the answer lay outside herself, so Christ cannot begin his work in us until we admit that our salvation must come from the outside. The problem Christians face is that while they may understand that their justification comes from the outside, for all practical purposes they act as if their sanctification comes from within and from under their own power. So during Lent, we contemplate and pray and read Scripture, which are all necessary to be sure, but we forget that Lent is another place along the journey of moving toward the perfection that God has for us that is less and less about us and more and more about God and others. Lenten discipline should be just as much concerned with works of service as it is with prayer and meditation.

To receive forgiveness is a great blessing. To offer it is also a blessing... and a sign that we are spiritually and morally becoming more like God.

During this season of Lent, we would do well to practice a forgiveness that travels both ways; for the sake of others, and for ours as well. We will be much better off with a divine focus and with less obsessing over our unspiritual navel lint.
___
*R.C. Moberly, Atonement and Personality. London: Murray, 1901.
**G. Wainwright, Doxology: The Praise of God in Worship, Doctrine, and Life. New York: Oxford, 1980, p. 76
Posted by Allan R. Bevere at 7:00 AM