Today is "Eat an Apple Day." So, unless you are allergic to them, go ahead and have that apple. They are nutritious. One medium apple has between 90 and 100 calories, no fat or cholesterol, and plenty of potassium, Vitamin A, and fiber. I suppose that old adage is somewhat true about keeping the doctor away.

Speaking of "Eat an Apple Day," there are lots of special days throughout the year. Some of the stranger ones are:
I guess Thanksgiving, Christmas, Easter, et al are  not sufficient.

You can get an almost exhaustive list of special days throughout the year here.
___
Atheists are forming churches, places for atheists to gather to celebrate life and being in community"

For the most part, this Sunday morning congregation has been enjoying something that looks a lot like a traditional church service. The addition of a frenzied clapping game, "mini-rave" break-out sessions, and those billboard anthems might be the most immediately obvious differences, but there is another significant departure: this church is a God-free zone.

The numbers are still small, but the growth has been exponential since the first atheist church service was held in January. The idea is simple: it has all of the community spirit, engagement, and inspiration of a church without any of the religious aspects. Each service has at least one guest speaker, from economists to poets, a moment of reflection and, above all, repeated entreaties to get to know the rest of the people there.

I need to give some thought to the interesting implications of atheists gathering together in this way, but one thing that this confirms to me that Christians need to understand: Atheists can be happy people who believe their lives have purpose. Believers may think that's a delusion on their part, but we must remember that many atheists believe that belief in God is also a delusion.

Is it possible that such atheist gatherings could be used by God in God's prevenient grace? Hmm....
___
Getting back to apples, though in a somewhat different vein, more than a few members of the "Apple Cult" stood in line for hours to get the latest iPhone that will, as one Facebook friend of mine wrote, is a coveted trinket today, but passé next year. There is no gizmo, gadget, product, or thing that I would stand in line for hours to get. Life does not consist in stuff, nor in the obsession with stuff. We live in a world of planned obsolescence. In his book, Allah: A Christian Response, Miroslav Volf writes,


A major cultural disease is spreading through many nations today, especially those highly  integrated into the global economy....

In the past great religions and philosophies have all sought to humanize and channel desire.... Today market forces and libertarian notions of freedom have colluded to stimulate desire and give it free reign; increasingly, we want desires gratified, not shaped, redirected, moderated, or deferred. We even craft religion as a servant of our pleasure, with God conceived of as not much more than a "divine butler" (pp. 214-215).

Jesus, quoting Deuteronomy 8:2-3, said that human beings do not live by bread alone (Matthew 4:4). If life is more than daily nourishment than it surely must be the case that we can live for a short period of time without the latest iPhone.
___
By the way, I don't think Apple will be asking me to be a spokesperson in the near future.
___
Speaking of stuff, I object strenuously to being called a consumer, as if my sole purpose in life is to consume and use things. I hope that after I'm dead I will have added something to this world for the sake of Jesus Christ. I don't want to be a taker; I want to be a giver.
___
There are things worse than death. For some people pain is worse than death.  The video below is a brief clip from a Piers Morgan interview with Rick and Kay Warren on their son's suicide. It is worth watching. The full interview is being rebroadcast tonight at 9:00 on CNN. (HT: John Meunier).

___
Nine comments that can get you fired.
___
Contrary to popular opinion, the first day of fall (autumnal equinox) and the first day of spring (vernal equinox) do not create special conditions to balance an egg on its end. An egg can be balanced any day of the year if one is careful and intentional.
___
Quotes of the Week (Possibly, but Not Necessarily Said This Week):

"Even the president, you will see tonight, will shake his groove thing every now and then."-- First lady Michelle Obama mentioning her husband's dance moves.

"They never got rid of me."-- Former House Majority Leader Tom DeLay back on Capitol Hill.

"I value Christian unity and denominational particularity. I think denominations should resist being swayed by fads and trends-- especially ones that would move them to become something entirely different than they were historically and theologically."-- Roger Olson

"The message of the gospel of King Jesus is indeed a message of reconciliation through Jesus' death and resurrection. Sinners are reconciled to God, to themselves, to each other, and to creation. The reconciliation of all things awaits Jesus' coming, when all is made new in him. But the beginning of that reconciliation is happening now. As God pursues the lost even through us."-- Ted Gossard

"He was fastidious and fair-minded (while sometimes satirical), probing and thoughtful, logical and magisterial, orthodox and arresting, and clear and compelling. He was clever at finding the best literary forms for what he had to say, and rich in analogies that are both arguments and illustrations in one. In short, he was never less than a first-class read. That is a main reason why, unlike many writers of the past and against his own expectations, his reputation and sales have soared sky-high during the thirty-five years since his death."-- J.I. Packer on C.S Lewis.
___
You Can't Be Serious?

"He has been… open, practically apolitical, certainly nonpartisan, in terms of welcoming every idea and solution."-- House Democratic Leader, Nancy Pelosi on President Obama.

"None of the newspapers ever attacked my issues, none of the other candidates even bothered to take me out on the issues because they knew I would beat them."-- former New York mayoral candidate, Anthony Weiner

The western-most point in the lower 48 of United States is located in Washington State.

The pumpkin is a member of the gourd family.
___
I Love Irony. It's So Ironic: 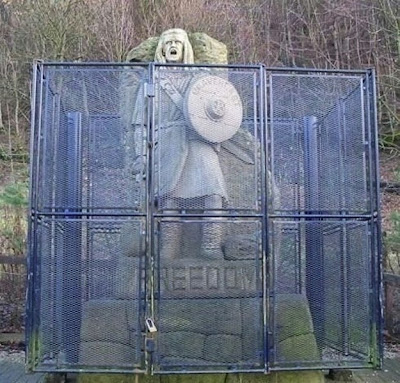 On September 21 1802, Bishop William White ordained Absalom Jones as America's first black priest in the Episcopal church. He was also the first black minister of any mainstream church in America.
Posted by Allan R. Bevere at 1:00 PM

I should guess that the westernmost point in the USA would be in Hawai'i, or Alaska, if Hi happens to be in the Eastern hemisphere. (I don't have an atlas before me, & it's not worth the effort to look it up.) Did you mean the contiguous 48, or is that one of those rhetorical questions that foolish folk like me shouldn't ask?

You are quite correct. I meant to write the lower 48.

It has been corrected.

Thanks for catching the mistake.