The Neglected Nativity of John the Baptist 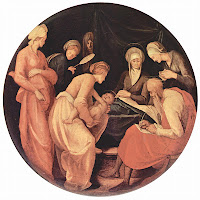 Yesterday (June 24th) was the Nativity of John the Baptist, a now much neglected day in the Western liturgical tradition. Historian Philip Jenkins laments the loss of emphasis on what was once almost celebrated as a second Christmas. Jenkins writes,

Many of the events in the Christian liturgical year coincide with older seasonal celebrations, which the church absorbed and consecrated. We think of Christmas (Midwinter), Easter (Spring) and All Saints/All Souls (the beginning of Winter). Sadly, though, Western churches at least have forgotten what was once one of the greatest of these parallel commemorations, which almost amounted to a second Christmas.

Somewhere along the line, we forgot St. John the Baptist.

For the early church, John the Baptist was clearly a critical figure. In fact, New Testament writers had to argue against those who saw him as at least comparable to Jesus. He was even a blood relative of Christ himself. Not surprisingly, then, the later church made him a mighty hero of the faith, and built him into its emerging calendar. But when you did that, the Biblical evidence pointed to an interesting correlation with Christ's own career. If John's mother was in her sixth month when Mary conceived, then presumably John was born half a year later than his cousin. As the church increasingly associated Jesus's own birth with Midwinter, then inevitably, John's must have fallen at Midsummer. Hence his nativity became fixed at June 24.

In Christian times, these customs became firmly attached to St. John's Eve, June 23. Among many other survivals, that is why the plant became St. John's Wort, while St. John's Fires burned on the hillsides. Still in northern Europe, St. John's Eve remains one of the very greatest moments of the year, paralleled only by Christmas. It has a comparable significance in other regions in Québec, where the linkage to fires and fireworks remains strong. Just as the evening before All Saints (All Hallows) became Halloween, so St. John's Eve served as a focus for elaborate merry-making, for parades and pageantry.
___
The entire post can be read here.
Posted by Allan R. Bevere at 6:00 AM