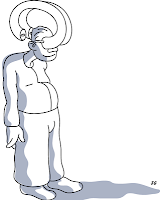 With the Obama Administration mired in and distracted by various scandals of late, which seems to be the norm in a second presidential term, once again we find that some of the president's detractors are piling on looking for anything they can to implicate President Obama directly, even reading more into some of the evidence than is warranted. On the other side, the president's supporters are minimizing the damning evidence and/or trying to spin the evidence in order to deflect away from the misdeeds of those in the IRS, the DOJ, and the State Department.

To be sure, there has been some serious misbehavior, but people continue to debate how bad it actually is and how far up the chain-of-command it goes. We may never know the answer to the latter. But regardless of one's politics and whether one is apt to give the Obama Administration the benefit of the doubt or assume its guilt, it is a good idea for all of us to think, once again, how every single one of us struggles with confirmation bias. Science Daily defines confirmation bias:

"In psychology and cognitive science, confirmation bias (or confirmatory bias) is a tendency to search for or interpret information in a way that confirms one's preconceptions, leading to statistical errors. Confirmation bias is a phenomenon wherein decision makers have been shown to actively seek out and assign more weight to evidence that confirms their hypothesis, and ignore or underweigh evidence that could disconfirm their hypothesis."

The fact that confirmation bias exists does not mean we can never get to the truth of something, but we must realize that it seems very natural for us to minimize or discard completely the evidence that undermines our position and exaggerate the information that confirms what we already believe. So, while we cannot avoid confirmation bias, we can be aware of it, and attempt to be fair and consider everything that is before us.

By the way, confirmation bias is not only a problem in politics; it is present in theological reflection and biblical interpretation as well. Perhaps this is one important reason why that regardless of the topic of discussion, we should seek to intentionally gather different voices at the table. Confirmation bias becomes more entrenched when we associate only with the like-minded.

Ultimately, it's not about what we want to believe; it is about what is actually true.
Posted by Allan R. Bevere at 6:00 AM

Seems like a piece of the human condition to point up the positive, (what supports our position), and play down the opposite. I know that I have to continually reflect and repent of my own arrogance and pride. I agree 100% with you that we must seek out diverse positions. If nothing else, that will force us to act humbly when dealing with contrary positions.

Really? I thought this was a dialogue about the rite of confirmation.