On Just Being Dad 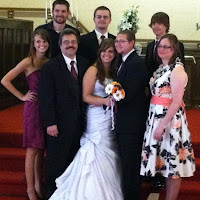 I very much enjoy being a pastor and a seminary professor, but the most meaningful role for me in adulthood has been that of a father. Carol and I have four wonderful children who are now adults. As a pastor, I have had the opportunity to be a part of special times in their lives in a way most dads cannot-- baptism and marriage to name only two. I know of pastors who have baptized their children and who have officiated at their weddings. For those pastors, it was very meaningful to participate in such a special time in their lives, and I very much respect their decision in such matters. But I have never desired to be a pastor on such occasions. On those days, I have just wanted to be a dad.

All four of our children were baptized by other pastors. I wanted to stand on the other side of the baptismal font and along with my wife vow to raise our children as disciples of Jesus Christ. When our daughter Alyssa was married two years ago, I walked her down the aisle as dads traditionally do, gave her a kiss, and sat down next to Carol. This past Saturday I did the same thing with our other daughter, Courtney; and it was fun just being a dad.

With the demands of ministry, it can be so easy for pastors to be all-consumed by their profession. As a workaholic myself, I have struggled over the years in keeping clear boundaries between my vocation and the other areas of my life. At times, I have been able to draw those boundaries, at other times I have not done so well. For me personally, one of the things that reminds me that the role of pastor does not describe my life in its entirety has been to step out of that role when my children could use a pastor, and allow someone else to play the part. Moreover, I want my children to develop a good and meaningful relationship with their pastor, and events such as baptisms and confirmation and weddings and... yes... eventually even funerals provide the opportunity for that relationship to grow. Thus, there are times for Pastor Allan R. Bevere to step out of the way and just be someone else.

This past Saturday I was just being dad. It was great!
Posted by Allan R. Bevere at 12:48 PM