Anchors Aweigh! Sailing Forward on the Sails of Tradition 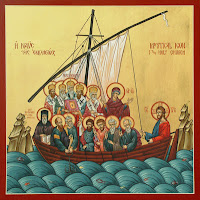 Peter Enns links to and comments on a post by Father Ted Bobosh who wrote a post entitled, "The Ship of Salvation's Sail not its Anchor." Bobosh writes,

Tradition, like Scripture, is not  made holy by being carved into stone, but rather by being interpreted within a community, by being the heart of the community's relationship to God and the world.  Tradition is thus alive and constantly relating to the world, not written in stone and frozen in some past understanding.

A very new thing happened in the Gospel that previous iterations of God's word were not able to grasp–namely a messiah who was executed by the Romans rather than defeating them and then raised from the dead. The tradition had to be transformed to account for this.

Pete notes that in some conservative Protestant circles tradition is rejected in favor of a flat reading of Scripture that mutes the Bible's dynamic quality. He is correct. I would also say in that in my own mainline Protestant experience, more than a few liberals reject tradition as simply outdated dogma that enlightened folks can no longer believe.