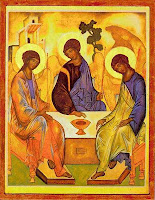 This Sunday is Trinity Sunday, which is appropriately observed after Pentecost and the coming of the Holy Spirit. It is important that we not treat the Trinity as an appendix to the Christian doctrine of God, which is the unfortunate legacy of too much twentieth century theology. The Trinity IS the Christian doctrine of God. Classically when Christians say "God" they mean, "Father, Son, and Holy Spirit." Please consider the following:

2) The doctrine of the Trinity has practical implications for the doctrine of salvation. Contrary to some who have suggested that Trinitarian speculation in the early church was a distraction and somehow beside the point, the early fathers and mothers in the faith understood that at the heart of the Trinitarian controversies nothing less than the salvation of humanity was at stake. At the heart of it all was this question: "If we say thus and so about God, what does it means for our salvation?" To affirm that Jesus is fully divine and fully human is to rightly understand that only God can save and that God cannot save that which God has not become. It is no accident that one of the earliest proclamations of the first Christians was that Jesus is Savior.

3) The early Christians also proclaimed that Jesus is Lord. Such a proclamation is steeped in the Old Testament context of God's lordship over all the world. It is not a coincidence that the Apostle Paul takes Old Testament Scriptures that clearly refer to Yahweh and applies them to Jesus (e.g. Philippians 2:6-11).

4) If one studies the history of the early church councils it appears that the discussion of the Holy Spirit comes into the picture almost incidentally. There is some truth to that observation. Nevertheless, there is good reason that the Spirit is by necessity included in the Trinitarian formulations. God the Father and the Son are present in the Spirit's workings in the world. In John's Gospel Jesus tells the disciples that he must go away if the Spirit is to come (16:7), but before this Jesus informs them that with the coming of the Spirit, he will come to them (John 14:18).

5) The doctrine of the Trinity affirms that God is by nature relational. This explains why the universe, including human beings, are intrinsically relational. Theoretical physicist turned Anglican priest and theologian, John Polkinghorne writes in his book, Science and the Trinity:


With physics moving in a more holistic direction, we might expect by analogy the need to challenge the individualistic atomism that is so characteristic of contemporary thinking about human nature. If electrons are counterintuitively entangled with each other, we may need to contemplate the possibility that persons participate in some greater solidarity than atomised Western society is able to recognize. Such an insight is surely consonant with the Christian understanding of the community of the faithful as the Body of Christ, constituting a web of relationality vastly more comprehensive than the one-to-one exchange of I and Thou.

These remarkable developments in relational and holistic thinking that are taking place within the fold of science are deeply congenial to Trinitarian ways of thought.. They by no means "prove" the Trinity, but they are profoundly consonant with a theology of nature that sees the relation of perichoretic exchange between the divine Persons as lying at the heart of the Source of all created reality. One could paraphrase the title of John Zizioulas's insightful book on Trinitarian theology Being as Communion, by the phrase, "Reality is relational" (75).

Thus, even the universe itself may be a vestigia trinitatis.

There is indeed good reason to affirm that the Trinity IS the Christian doctrine of God. That is why Trinity Sunday is important. More can be said, but this is sufficient.

In Conclusion : To neglect the doctrine of the Trinity is to neglect the essence of our Christian faith in the God who created all that is and who has stamped God's image into the universe and even more clearly in humanity, and most clearly and decisively in Jesus Christ, who is the image of the invisible God-- God with a human face.
Posted by Allan R. Bevere at 6:21 AM

If you are going to engage in critique you must post who you are. No anonymous posts of this nature are allowed on this blog.

If you would like to identify yourself and repost what your wrote, I would be happy to interact with you.

Another reason to add in is that the OT text does have 2 separate, but, equal Yahweh's and the first Jewish Christian's assumed Jesus was the visible Yahweh of the OT.

Mike Heiser has done some presentations on this issue, here's a super long one:

I've heard Heiser say the spirit also may be seen as Divine in the OT text, but, I have yet to see a presentation documenting this.

Thanks. I have some serious doubts over his claim of two Yahwehs.

Well said brother! A book I found very helpful was "Ministry in the image of God" by Dr. Seamands.

The book outlines some of the practical implications of our trinitarian theology in ministry.

Did you take that comment as limiting God to 2 as opposed to 3 separate persons?

It doesn't, it's just easier to see 2 co-equal, yet different Yahweh's in the OT text than 3 is all.

Thanks for the link, Bill.

Why would more than 1 Yahweh in the OT disturb the trinitarian Christian view or do damage to the OT?

How do you see the first Jews coming to the view Jesus is also Yahweh The Son, yet separate from Yahweh The Father?

The Two Yahweh notion seems to come from Gnostic literature after the time of Christ. It is being championed today by atheists with an animus against Christianity. These same 'scholars' advocating two Yahwehs are like those who might claim on the evidence of henotheism held by early Hebrew peoples around the time of Abraham, claim they worshipped chickens. Have a little intellectual discipline, people.

Thanks for your comments. It is certainly acceptable to disagree, but please do so respectfully and civilly.

The issue I have with the 2 Yahwehs approach has nothing to do with Trinitarian implications. It has more to do with the damage it does to the interpretation of Old Testament texts.

To claim that Jesus is God incarnate is not to say that the Son is Yahweh. I think Paul applies the Yahweh texts to Jesus because, he believes that in a decisive way, Jesus reveals the one true God, but I would avoid the language of Jesus is Yahweh. Hence, the reason that Trinatarian language is so careful and nuanced.

That icon at the top of the article, The Hospitality of Abraham and Sarah, is from the Old Testament and is the Christian icon of the Holy Trinity representing God visiting Abraham and Sarah in the form of three persons.

Thanks for the clarification.

CAN A PERVERTED GOSPEL SAVE?

Does it matter what men believe concerning salvation? Can men who preach a gospel different than the one the apostles taught still go to heaven?

Galatians 1:6 I am amazed that you are so quickly deserting Him who called you by the grace of Christ, for a different gospel;(NASB)

The Judaizers, who were Jewish Christians, were deserting God by teaching that men had to keep some of the Jewish ceremonial practices to be saved. They were perverting the gospel.

Galatians 1:7 which is really not another; only there are some who are disturbing you and want to distort the gospel of Christ. (NASB)

Today there are many different denomination that are not preaching a completely new gospel, they are just distorting the old one.

IS IT A SERIOUS OFFENSE TO PREACH A GOSPEL PLAN OF SALVATION OTHER THAN WHAT THE APOSTLES TAUGHT?

Galatians 1:9 As we have said before, so I say again now, if any man is preaching to you a gospel contrary to what you received, he is to be accursed! (NASB)

PERVERTING THE GOSPEL IS SERIOUS!

Is the doctrine, of saved by grace alone, a distortion of the gospel? The doctrine of, grace alone, stipulates that men have no responsibilities concerning their salvation. The teaching is, that God does it all.

Hebrews 5:9 And having been made perfect, He became to all those who obey Him the source of eternal salvation,

Paul and Silas did not answer the jailer by saying, "If you have been preselected for salvation; God will cause you to believe so you may be saved." The jailer and his household were not saved by grace alone. They believed and were baptized in water.

JESUS IS THE SOURCE OF SALVATION FOR ALL WHO OBEY HIM.

CAN MEN PREACH ANOTHER WAY OF BEING SAVED AND STILL GET TO HEAVEN?

THE APOSTLES DID NOT TEACH MULTIPLE PLANS OF SALVATION!


YOU ARE INVITED TO FOLLOW MY CHRISTIAN BLOG. Google search>>>> steve finnell a christian view

Love it! Very interesting topics, I hope the incoming comments and suggestion are equally positive. Thank you for sharing this information that is actually helpful.

The strongest and fearless person is the one who knows his/her mistakes and still seek for guidance and forgiveness. Have a pleasant day and keep on smiling. Visit my site for more information.