The NRA of the Left 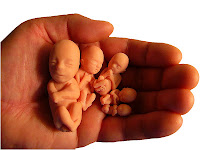 When it comes to politics, I am an equal opportunity annoyer. I will be critical of the right when I think they are wrong, and I will offer the same to the left.

I have been critical of the National Rifle Association in recent weeks. It has become a caricature of itself. It recently opposed and helped to defeat common sense legislation that would have expanded the practice of background checks for would-be gun owners at gun shows and over the Internet. The NRA used various ridiculous arguments to oppose this legislation-- such as, it penalizes law-abiding citizens. Well so does having to produce an ID at the bank, I suppose. The polarization of politics et al in American society is a toxic poison in which no-brainer measures and reasonable positions on issues are perceived as irrational and somehow evil.

Well, the political right isn't the only group infected with such bizarre thinking. Kirsten Powers, a liberal Democrat suggests in an editorial that the abortion rights crowd has become the NRA of the left where common sense and logic no longer operate. She writes,


We live in a country where if a six-months-pregnant woman started downing shots of vodka in a bar or lit up a cigarette, people might want her arrested. But that same woman could walk into an abortion clinic, no questions asked, and be injected with a drug that would stop her baby's heart.

I'll put my cards on the table: I think life begins at conception and would love to live in a world where no women ever felt she needed to get an abortion. However, I know enough people who are pro-abortion rights—indeed, I was one of them for most of my life—to know that reasonable and sincere people can disagree about when meaningful life begins. They also can disagree about how to weigh that moral uncertainty against a woman's right to control her body—and her own life. I have only ever voted for Democrats, so overturning Roe v. Wade is not one of my priorities. I never want to return to the days of gruesome back-alley abortions.

But medical advances since Roe v. Wade have made it clear to me that late-term abortion is not a moral gray area, and we need to stop pretending it is. No six-months-pregnant woman is picking out names for her "fetus." It's a baby. Let's stop playing Orwellian word games. We are talking about human beings here.

How is this OK? Even liberal Europe gets this. In France, Germany, Italy, and Norway, abortion is illegal after 12 weeks. In addition to the life-of-mother exception, they provide narrow health exceptions that require approval from multiple doctors or in some cases going before a board. In the U.S., if you suggest such stringent regulation and oversight of later-term abortions, you are tarred within seconds by the abortion rights movement as a misogynist who doesn't "trust women."

Speaking as a liberal who endorses more government regulation of practically everything—banks, water, air, food, oil drilling, animal safety—I am eternally perplexed by the fury the abortion rights contingent displays at the suggestion that the government might have a serious role to play in the issue of abortion, especially later-term abortion. More and more, the abortion rights community has become the NRA of the left: unleashing their armies of supporters and lobbyists in opposition to regulations or restrictions that the majority of Americans support. In the same way the NRA believes background checks will lead to the government busting down your door to confiscate your guns, the abortion rights movement conjures a straight line from parental consent to a complete ban on abortion.

Such an attitude makes having an honest conversation about abortion almost impossible.
___
Powers' entire editorial is worth a read and can be found here.
Posted by Allan R. Bevere at 8:53 AM

Seriously, I've been thinking along the same lines. Glad I'm not the only one.

With regard to the complete failure of the administration to advance it’s agenda to restrict the right of law-abiding Americans to exercise their 2nd Amendment rights, the NRA acted laudably in behalf of all Americans to prevent an unconscionable abrogation of the 2nd Amendment and the COTUS. Defined by the Supreme Court as a individual right, (District of Columbia et al. V. Heller) there is no legitimate rational to argue qualifying this constitutional right according to what opponents would be willing to permit.

We are a nation that operates according to law. We are not yet a nation that operates according to current opinion, political convenience or even the media flavor of the day. No constitutional right is qualified by what it’s opponents are willing to permit, nor should such be now the norm for the 2nd Amendment. Any effort to so restrict the 2nd Amendment or other plainly stated constitutional rights is not only not rational but inherently evil. The rational justification for extreme distrust of any government oversight of the 2nd Amendment is aptly demonstrated by the outrageous excesses of restrictions and prohibitions that have been the norm in locals and states where opponents of the 2nd Amendment have been in control.

There is a constitutional process by which those who want to can change the COTUS. Let them use that process. However to allow them to disregard the COTUS to effect change to the constitutional rights of Americans in service to their own political agenda is beyond any possibility of acceptance.

I read this editorial this morning and had to take some time to post on it. I suppose I have become a blogger through and through.

Well, we disagree on this. The SCOTUS has ruled that while the second amendment guarantees citizens the right to have guns, that does prevent the government from regulating them-- says Justice Scalia.

Moreover, the recent legislation that did not pass had only to do with expanding background checks to include Internet sales and gun shows, nothing more.

The SC ruled that the 2nd Amend. is a individual right refuting efforts to define it as a collective right.

The recent legislation was part of a large package of laws put forth by the administration to restrict the rights of law abiding Americans. It is current law that any gun purchase from any firearms dealer either via internet or at a gun requires filling out both applicable federal forms as well as a back ground check. Private sales between individuals are treated as they always have been, as private sales. If that sale requires shipment, then it must be done through a federally licensed shop. No one other than a legally licensed person may receive shipment of a firearm either for sale or transfer.

The absolute rejection of the recent legislation reflects the complete lack of credibility which the administration has in this as well as so many other areas of broad national concern.

Anon... I do not allow criticism by those who remain anonymous. I am therefore deleting your comments. Should you desire to make your voice heard, voice your views as someone who identifies yourself as who you are.

IF I had any trust in the nature of men and particularly men in the agency of any secular state's power, I would side with you on the reasonableness of the "background checks" debate.

Background checks probably already have been utilized as a registration file, so those who lawfully want to protect their families are targets of the state's agents, not criminals who never will go through the legal process.

This lack of trust is unavoidable for me, otherwise of course background checks and even various other restrictions would make imminent good logic.

I don't even carry a gun, but, I don't want my city, state or the USA knowing if I did. I also don't want violent criminals to know this.

A useful analogy. These are areas deeply shaded in grey...and our human tendency to create idols out of our absolutes does nothing to facilitate real conversation. Or to move us forward constructively.

Current industrial scale abortion is the consequence of judicial opinion unsupported by the COTUS. In strong contrast, the 2nd Amendment as clearly stated and as applied by the Supreme Court is a individual right the same as all other civil rights in the COTUS. Very far from useful, to suppose that citizens should tolerate encumbrance of the free exercise of their civil rights as determined by the court of public opinion or political convenience is without merit.

There is a constitutional process available by which to effect changes that would best suit a genuine majority of Americans. It has been used on numerous occasions. Let those who want to make any changes to the constitutional rights enjoyed by citizens follow that process. That is what it is there for.

The first amendment is indeed restricted. We do not allow a religious group to sacrifice children because they claim it is an essential part of their religion. No amendment is above court and government restriction. Of course, the legislative branch and the executive branch may not restrict an amendment more strictly that the court allows.

Re: first amendment. The court does not trump the COTUS. In fact the very idea of judicial review is without basis in the COTUS. It is the invention of those who would privilege the court above the elected representatives of the citizens. Jefferson rightly saw the consequence of the judiciary defining itself a super-constitutional... i.e., it makes the COTUS a vessel of clay, far from what he and the founding fathers originally intended.

Happily even illegitimate restrictions by the courts on the first amendment are few. That has not however been the case with the second amendment, especially in areas where activist left leaning justices have been in control.

Only the legislative and executive branches properly have any role in any changing of the COTUS. That was the intention of the founding fathers. Elected representatives acting through the provided process are to make any changes that may be deemed necessary, not judges who are not held accountable by or answerable to the citizens of the nation.