On the Fear of Being Ordinary: A Lectionary Reflection on Genesis 11:1-9 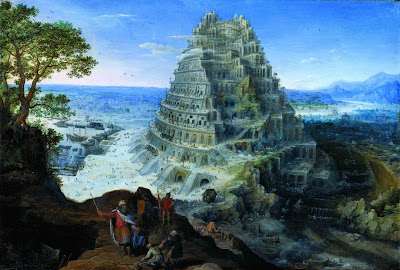 One of the reasons that reality TV is so popular in American culture is the human desire to be more than ordinary. We want to be famous. The celebrity cult is strong. We follow and admire and stand in long lines to see our favorites athlete or actor because down deep we want the same recognition and following that they have. We long to be recognized in the restaurant and on the street. And we certainly wouldn't mind signing a few autographs as well. We watch reality TV in order to live vicariously through the exploits of those on the screen. And if ordinary people can become extraordinary by being on television, maybe there's hope for us as well. The Bible describes this desire for fame and recognition as making a name for ourselves.

In the opening chapters of Genesis, God names creation-- the greater light, the lesser light-- and then there are the stars. God names creation because God has power and control over it. God gives Adam the task of naming the animals, thus giving humanity responsibility over the rest of creation. "God blessed them, and God said to them, "Be fruitful and multiply, and fill the earth and subdue it; and have dominion over the fish of the sea and over the birds of the air and over every living thing that moves upon the earth" (Genesis 1:28).

And while God gives humanity the responsibility to be the caretakers of the world, God reserves the naming of humanity for himself. But we human beings were not content to let God name us, to let God be our Master. The first thing Adam does after he is cast out of the garden is to name his wife, "Eve"-- and so the human desire to control and have power over one another and over our own lives begins.

In Genesis chapter 11, the inhabitants on the Plain of Shinar want to make a name for themselves, they want to control their own destiny, to be the masters of their fate and the captains of their souls. "Then they said, 'Come, let us build ourselves a city, and a tower with its top in the heavens, and let us make a name for ourselves; otherwise we shall be scattered abroad upon the face of the whole earth'" (11:4). The purpose of this tower is not so much a monument to their achievement as it is a great ladder to reach the heavens that the inhabitants might storm the gates of heaven itself to present to God the terms of their own freedom. They fear just being ordinary. How can they be more than ordinary if they have to serve an extraordinary deity?

While the cooperative efforts of communities can lead to much good, such group efforts can also lead to much calamity and misery, particularly when we act as our own gods. The examples in history are many: Nero, Genghis Khan, Napoleon, Stalin, Hitler, Mao Zedong, Pol Pot. The desire to be more than ordinary can lead to infamy.

It will take nothing less than divine intervention to create a community charged specifically with fulfilling the mission of God in the world, a fellowship singularly committed to giving up its desire to name itself and submitting wholly and completely to the God who names it, to the God who names his people.

Such a community can only be created by the coming of God's Spirit in power.

Pentecost has been a long time in coming.
Posted by Allan R. Bevere at 9:24 AM