The Futility of Extinguishing the Fire: A Lectionary Reflection on Acts 5:27-32 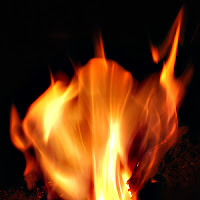 This Sunday's first reading gives us a  glimpse backward to Easter Sunday and a preview of the results of Pentecost yet to be. The disciples witness boldly to their resurrection faith in Jesus, which is empowered by the coming of the Holy Spirit. Here in Acts chapter 5 we see both the resurrection renewal in the preaching of the disciples and the power of the Spirit that gives them the courage they need to proclaim the Good News of the risen Christ in the midst of hostile circumstances.

The resurrection of Jesus started a fire in the hearts of the disciples (Luke 24:32), and the coming of the Spirit on Pentecost fanned the flames. But Caiaphas, the high priest, was bound and determined to extinguish the fire. The religious authorities had warned the followers of Jesus not to speak publicly about him, but to no avail. They were witnesses to the new thing God was doing and they refused to obey. "We must listen to God rather then you," they say in response to Caiaphas.  This undoubtedly angered the high priest, who spoke on the authority of God. Now the apostles were denying the high priest's authority in such matters. The powerful do not like to be challenged.  They are used to getting their way. Caiaphas may do what he please, but as long as the apostles have breath in their bodies, they will indeed offer the gospel to all who will listen. Heidi Peterson writes,

The high priest's questioning of Peter was to the point. Why have you defied my express directive to desist this witnessing? There was a time when Peter might have thought that a reasonable question. There was a time when Peter thought the Holy Spirit could be managed if human beings were just properly instructed in matters of authority and restraint. Right after experiencing the transfiguration, he and companions James and John had spoken sternly to a man who was casting out demons in Jesus' name. They reasoned that the man was not on the official roster of disciples. They even reported the incident to Jesus as if they had done a good thing (Luke 9:49-50).

But that was before: before Jesus' crucifixion, before Peter's own denial, before Peter saw the risen Christ, before the church received the gift of the Spirit. At this point, when the high priest forbids Peter to witness, he might as well have been forbidding Peter to breathe.

And that is exactly the point-- proclamation and witness are as necessary to the life of the disciple as breathing is to the life of the body. It is not a question of whether or not the disciple will proclaim the gospel in word and deed; it is a matter of when and how. The apostles had experienced the risen Christ in their midst. They had been given new life that was more important than life itself. Even the threat of death could not quiet them.

Caiaphas did his best to stamp out the fire of the Spirit that was beginning to rage in Jerusalem; but attempt would prove to be futile. The high priest would die and be buried while the preaching of the risen Christ continued.

That proclamation in word and in deed continues in the twenty-first century. Even now the word is still being spread to the ends of the earth.
Posted by Allan R. Bevere at 11:05 AM