Being Human Is Not the Problem 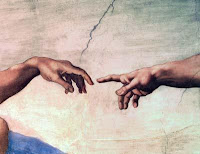 Most of us have said it at one time or another in attempting to explain a mistake or some unacceptable behavior on our part-- "Well, I'm only human"-- as if our frailties, our shortcomings are the result of our humanity. Wrong!

God created us human. In the saga of the creation of humanity in Genesis, we are human from the beginning. "...then the Lord God formed man from the dust of the ground,* and breathed into his nostrils the breath of life; and the man became a living being," says the first book of the Bible in 2:7. Women and men became living beings-- nephesh hayah in Hebrew. They are human. Moreover, not only are they human they are made after God's own image.

Through millions of years, the divine goal in evolutionary progression was to bring into existence human beings made in God's image, to reflect the divine character in God's world. But something went wrong. We became sinners, and our sin made us less than human, our sin warped, distorted, cracked the image of God in us. To be sure, human beings still reflect the imago dei-- the image of God as it is expressed in Latin-- but it is blurry. It is rather like looking at our distorted and warped appearance as reflected by the mirrors in a fun house. The problem is that the loss of God's perfect image in us has not resulted in much fun for humanity. When we became sinners we became cracked icons and our sin has made all of us less than human.

And there are all sorts of ways that we human beings demonstrate our inhumanity:

When people hold death parties, gatherings that celebrate the death of a politician and public servant whose policies they did not like, we demonstrate our inhumanity.

When we hoard our blessings in this life and surround ourselves with luxuries justifying it by saying we earned it and deny poor and destitute children their daily bread, we demonstrate our inhumanity.

When we judge people based on the color of their skin or the region of the country or world they come from, we demonstrate our inhumanity.

When people enslave children and women into the sex trade forcing them to act in ways that diminish the image of God in them, we demonstrate our inhumanity.

When we gossip about others, we demonstrate our inhumanity.

When we demonize people who do not share our politics, we demonstrate our inhumanity.

Whenever we act in our own interests in ways that deny to others what God wants to give them, we demonstrate our inhumanity.

When we lie, cheat, steal, commit adultery, and profane the name of God, we demonstrate our inhumanity.

When we justify our inhumane behavior by claiming that God is on our side, we demonstrate our inhumanity.

In his book, The Humanity of God, the great theologian, Karl Barth writes,


What is the humanity of God? It is God dealing with humanity. It is wrapped up in his deity. God's deity cannot be properly understood without his humanity. The whole of God's activity toward women and men is his humanity.

We are human precisely because we are made in God's image, and when sin distorts that image we become less than human. It is, therefore, no surprise that Jesus Christ, the God/Man becomes the remedy for our less than human condition. In all of its mystery, Jesus is fully the presence of God with us, which makes him fully human; and it is the fullness of his humanity that allows the very presence of God to dwell in him. In Jesus God has come to restore our humanity and the image of the divine in us.

The New Testament does not say that Jesus died to remove our humanity; he died to take away our sins.

Friends, the problem is not that we are human. The problem is we are sinners.
Posted by Allan R. Bevere at 7:10 AM