The Dark Side of the Bible 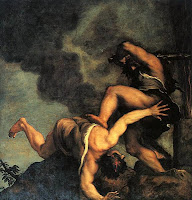 From a post by Greg Boyd:
___
While most of the Bible exhibits a "God-breathed" quality, reflecting a magnificently beautiful God that is consistent with God's definitive revelation on the cross, we must honestly acknowledge that some depictions of God in Scripture are simply horrific. They are included in what is sometimes called "the dark side of the Bible." To give just a small sampling, we find God portrayed as doing things such as:

* …causing pregnant women to having their wombs ripped open and their children dashed on the ground (Hos. 13: 16)

* …refusing to allow any compassion to keep him from smashing parents and children together (Jer. 13:16)

* …telling Israelite men that, while everyone else in a region is to be mercilessly slaughtered, they may spare women they find attractive and marry them. However, if they later "find no delight in her," they may turn them out on the street (Deut. 21:10-14)


In my forthcoming book, Crucifixion of the Warrior God, I have an entire chapter of material such this. It is not easy reading! Now, out of obedience to Christ, who consistently spoke of the Hebrew Bible as divinely inspired, and in solidarity with the historic orthodox Church, I feel obliged to confess all Scripture, including horrific material such as this, is "God-breathed" (theopneustos, 2 Tim. 3:16). At the same time, I believe it is also vitally important that we remain ruthlessly honest with ourselves and others and God about this material. How else can we describe material such as this as anything other than horrific, macabre, grotesque, and even revolting? If a portrait of God commanding people to slaughter babies and causing mothers to eat them doesn't qualify as revolting, what would? If you found material like this in any other ancient or modern text, would you hesitate for a moment from labeling it as macabre, revolting, or some such phrase? If we are honest, we cannot deny it. So how does horrific material like what I just reviewed suddenly become less revolting by virtue of being found in our sacred text rather than someone else's?

I will say more about this in blogs to come, and much more to say in my forthcoming book. For right now I will just leave you with this. I only began to discern a way to understand how horrific depictions of God in Scripture bear witness to the crucified Christ when I finally stopped trying to deny these depictions were horrific. So long as we try to tidy up, sanitize, minimize and piously gloss over material that we honestly know in our hearts is macabre and revolting, the best case scenario is that we will succeed at finding a slightly less revolting deity in these portraits than we initially found. This is what standard evangelical apologetic approaches accomplish, on a good day. It is in essence the approach I adopted five years ago when I began this present project. But I came to see that even the very best of these approaches are of no value when it comes to disclosing how this material bears witness to the self-sacrificial, enemy-loving, non-violent love of God on Calvary. And to make matters worse, all the while we are tidying up our macabre depictions of God, we are bearing some responsibility for the way this material continues to serve as a precedent for people to appeal to in order to justify their hatred and violence, as it has served throughout history.

As with all matters of faith, the place to start is by getting honest with ourselves, each other, and God by admitting the obvious.
___
The entire post, "Getting Honest About the Dark Side of the Bible," can be read here.
Posted by Allan R. Bevere at 1:00 PM