The Bible-- Chapter and Verse 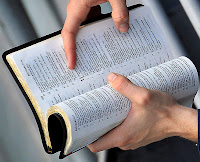 Mark Coppenger, pbnews:
___
NASHVILLE (BP) -- Like the fellow who thought he'd be crossing visible longitude lines on his ocean voyage to Europe, some may think that the chapter and verse divisions were on the sheet when apostles such as John (or psalmists such as David) wrote down Scripture.

But no, they wrote letters and poetry and Gospels and other history without numbering. Those markers were added centuries later. Indeed, when Jesus referred to Exodus 3:6 in Mark 12:26, He simply located it in "in the passage about the burning bush." Neither the "12:26" nor the "3:6" were yet in place.

To make a long story short, biblical scholars were making divisions of one sort or another in the centuries following the books' original composition, but it wasn't until the early 1200s that we got our current chapter setup, thanks to Archbishop of Canterbury Stephen Langton. As for the verses, Jewish scribes had already done work on the Old Testament around the year 900, and their work was wedded to Langton's. But the church had to wait another 300 years for its New Testament breakdown, performed by a French-born printer, Robert Estienne or Etienne (also know by the Latinized version of his name, "Stephanus").
___
The entire post, "Who Put the '3:16' into John 3:16?" can be read here.
Posted by Allan R. Bevere at 3:56 PM