On Not Asserting One's Rights: A Lectionary Reflection on Philippians 2:5-11 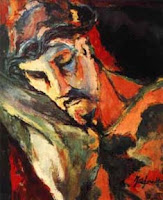 The problem with rights language as it is employed in the modern West is that it is primarily a selfish enterprise. We are quick to assert our rights while ignoring or opposing the rights of others. Of course, rights language is quite problematic from a Christian perspective, as I have argued on this blog over the years. The fact that Christians have so casually picked up the language of rights suggests that our beliefs and practices are much less theologically informed and more absorbed by modern Western individualism.

That is why Philippians 2:5-11 makes very little sense to those who have imbibed deeply from the well of modern moral reflection; for Paul suggests that it is more important for believers to give up what they think is owed to them, what they think they rightfully deserve for the sake of the gospel.

Let the same mind be in you that was* in Christ Jesus,
6 who, though he was in the form of God,
did not regard equality with God
as something to be exploited,
7 but emptied himself,
taking the form of a slave,
being born in human likeness.
And being found in human form,
8    he humbled himself
and became obedient to the point of death--
even death on a cross.

Paul had several reasons for writing to the Christians at Philippi. One of them was to correct serious divisions in the church. The congregation was splintered by personal differences involving rivalry, vanity, selfishness, and hostility. Paul writes to admonish the church and to encourage them to move toward unity.

The apostle's moral reflections are not based on an amorphous and slippery notion of rights, but is inherently theological in nature-- even more specifically, it is centrally Christological. Christian discipleship, Christian living is reflected in the life and example of Jesus Christ. Those who have had their lives changed, transformed, converted by the Jesus story must approach all of life with the same attitude as their Lord. They must operate as he operated-- through submission, humility, self-sacrifice, and love.

Here in this passage, Paul calls the Philippians to a radical lifestyle-- radical that is to those that believe the most important thing in life is the assertion of and insistence upon one's rights. He exhorts them to abandon the goals of this world and experience a community where greed, rivalry, wealth, and power over others are absent; where each member of the community lives life in complete service to others. The believers at Philippi had adopted a worldly model for success consisting in competition, selfishness, greed, and pride. They were employing in the church the methodology that they had all lived in the world. They realized that the Christian community as distinct from the world, but it appeared to be only a theoretical realization. They had failed to put into practice, to embody in their lives the unique message that is the gospel. Thus, their selfishness made them appear as any other institution in the world, which hurt their witness since they were not being a light to the nations.

Worldly principles have no place in the church because it is a community that operates by the divine principle-- the cross. The cross is the ultimate expression of the life and teaching of Jesus; and Paul tells the Philippians that they are to model their lives after Jesus' example. As Jesus totally poured out himself for others, so must they. As Jesus laid aside his equality with the Father, not considering it a right to be asserted, so the followers of Jesus are to lay aside their rights for the sake of others. This makes the church a unique community, a light on a hill that witnesses to the reality of God's kingdom come in Jesus Christ
Posted by Allan R. Bevere at 8:00 AM