Francis I: A Church Leader to Be Admired, Or an Example to Be Imitated? 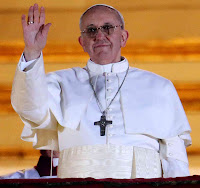 Much has been said and written about the new Pope, Francis I. It appears that he has many fans among Catholics and non-Catholics alike. Even the media loves him. (The love affair will end the first time he says something publicly about birth control and abortion.) Particular mention has been made of his simple life. As Archbishop of Buenos Aires, he declined to live in the luxurious palace of the archbishop giving it instead to a cloister of nuns. He lived in a small apartment downtown, cooked his own meals, answered his own door, and used public transportation. He regularly visited the poor and AIDS patients.

After his election as pope, it is reported that he greeted the cardinals standing rather than as has been the custom of sitting on the papal throne. When he greeted the people publicly for the first time as pope, he wore the more informal white cassock without the red cape and papal crown. He has eschewed security, for the most part, greeting people on the street and even removing the bullet-proof glass from the popemobile.

Francis I is a Jesuit, which is an order of the Catholic Church to be admired. Not only do they vow not to seek wealth and the trappings of prestige, but Jesuits undergo rigorous training in theology, philosophy, and an area of expertise. Francis I is a chemist. The Jesuits have a history of fostering excellence in education and have founded institutions of higher learning, among them being Georgetown University in Washington D.C.

There is indeed much to admire about Pope Francis I; and I admire him, even though as a Protestant I have some disagreements with him on theology and morality. But what I am wondering about in this post is if all this admiration from everyone somehow misses a deeper and more unsettling point. Are people enthralled with this pope's humble and simple lifestyle only because we think it makes the church look good; it is something that we hope everyone will admire, but not necessarily want to emulate? Is it not more significant that Pope Francis I serves, not as a holy poster boy for church leadership, but rather as an example for all believers to emulate. Christians are commenting on his simple dwelling in Buenos Aires. Are those who so admire this willing to downsize into a simpler abode as well? Francis I is concerned with the poor and those on the margins, not just in theory, but in practice-- offering is presence to the poor. Are those who admire this concerned with those on the margins only in theory, hoping someone else will practice what we refuse to do? Does Pope Francis I offer for many, not an example to be modeled, but as someone who will do such ministry for us, in our place, so we don't have take the time to offer our presence to those who we prefer would go elsewhere?

Church leadership is to set the example for all the faithful, not live a life in the stead of the faithful. Leaders, whether clergy or lay are not called to a standard that is higher and more rigorous than other believers. They are called to a high and rigorous standard in order to demonstrate to all followers of Jesus how God wants them to live as well.

It's easy to admire many great and faithful women and men who lead the church; it is quite another thing to follow in their footsteps in living a life of simplicity, humility, and service. Is part of the reason for the infatuation we have with Pope Francis I been the result of wanting and needing someone to live a particular kind of life because we know we need such people, and because we know many of his admirers would never themselves consider a life of simplicity, poverty, and generosity? We admire Pope Francis I, but would we consider him as an example to imitate?