The Unlikely Universe: It Is What It Is 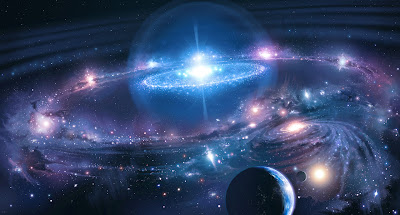 By Ethan Siegel-- Even though he doesn't deal with the matter, I think his argument may have some interesting implications for the question of God's existence.
___
I have a six-sided die. I’m going to roll it ten times, and record each roll. And when I'm done, I'm going to have an incredibly rare, bet-you-can't-reproduce-it result!

In fact, if you took a fair six-sided die and rolled it ten times, you'd have less than a 1-in-60,000,000 chance of getting that same sequence of outcomes! And yet, there’s no surprise there, or at least there shouldn't be.

Because every possible outcome of ten dice rolls — all 60,466,176 of them — was equally likely. But you might wonder if there was something special about the outcomes that I rolled.

But the thing is, that sequence of ten die rolls was really randomly generated, and there are a whole bunch of equally unlikely things that didn't happen.

In fact, this type of reasoning — where you ascribe an undue cause to an unlikely outcome from a random process — is a special type of logical fallacy known as the Inverse Gambler’s Fallacy.

Some of the things that happened were relatively mundane and fairly likely, others were somewhat unlikely and wouldn't occur very often if you started the Universe over with comparable initial conditions.

Because unlikely things happen all the time: that's part of what comes along with living in a chaotic Universe where many seemingly random outcomes occur. And people — many of whom are often reasonable scientists otherwise — use these unlikely outcomes from random events to try and sow doubt about the quality of the underlying scientific theories.

Don't let the observation of an unlikely event swindle you out of our great understanding of the natural world, but keep an open mind for even better explanations, because that's how science always moves forwards. In the meantime, enjoy our latest discoveries and what's quite possibly the largest structure in the Universe: so large it might even (somewhat) defy our preconceived expectations!
___
The entire post can be read here.
Posted by Allan R. Bevere at 9:32 AM

It's because of this kind of reasoning that I've never found the anthropic principle argument very convincing.

In what way? It seems to me that one can go a couple of different ways with this argument.